Getting Around, Plymouth Travel, Transport and Car Rental

Getting around the city of Plymouth is straightforward and rarely a problem. This city is surprisingly home to a fairly notable airport, which is situated extremely close to the city centre. Other modes of transport in and around Plymouth include bus travel, car rental, trains, taxis, and regular Brittany Ferries.

Address: Crownhill, Plymouth, Devon, PL6 8BW , England, UK
Tel: +44 (0)1752 204090
With regular daily flights linking London Gatwick Airport, together with Bristol, Jersey, Leeds and Manchester airports, Plymouth City Airport is the region's main air transport gateway to both Devon and Cornwall, and features a number of cheap flights and international airlines, such as Air Southwest, Air Canada, British Airways, Korean Air and Virgin Atlantic. The airport is just 4 miles / 6 km from the very heart of Plymouth and is easy to travel to, lying off Derriford Road, near to the A386. A number of ground transport options are available, including car hire, taxis and buses, operated by First Western National and CityBus. Plymouth City Airport is relatively small in size and also boasts a flying centre, for those learning to fly. 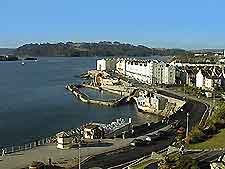 Rental cars can be found at both the airport and also within the city itself, with brands including Avis, Europcar and Hertz. Hiring a car is the easiest way to travel around the Plymouth area, with prominent thoroughfares including the A38 (Parkway), the Wolseley Road, Alma Road, Exeter Street, Union Street and Embankment Road.

Close to the city, the A386 heads northwards towards Tavistock and Sourton. Nearby, the Plympton area lies to the east, while the expansive Dartmoor National Park lies to the north-east. Other areas of interest, which are easy to travel to by car, include Wembury to the south-east, Torpoint to the west, and Millbrook to the south-west. Whilst car parks are available around the city, many visitors choose to take advantage of the numerous park and ride schemes, which are located on Plymouth's outskirts.

Several bus options are available in the Plymouth area, with the city itself being served by both First Western National and CityBus. The bus station is located along Armada Way and buses cover most of the city, usually being extremely reliable, cheap and popular with locals and visitors alike. Those looking to travel further afield will find various cities linked by National Express coaches, including London, (around six hours), Bristol (two hours) and Penzance (two hours), amongst other locations. 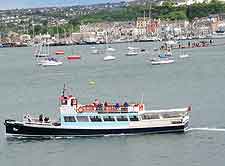 Address: Millbay Docks, Plymouth, Devon, England, UK
Brittany Ferries operate a popular ferry service from the Millbay Docks in the city, travelling to Roscoff on the northern side of France, and also Santander on the northern side of Spain. Car ferries run day and night and connect Devonport and Torpoint, with foot passengers being able to travel for free. A popular passenger ferry is also available between Stonehouse in Plymouth, to nearby Cremyll, which stands on the Rame Peninsula, and also from Calstock to Cotehele.

The Plymouth train station can be found in the very centre of the city and features many regular services to London Paddington, Birmingham, Bristol, Calstock, Exeter and Penzance. Exceptionally scenic, the Tamar Valley Line travels northwards and passes a number of attractive villages along the way.

Taxifast in the main taxi firm in the Plympton and Plymouth area and these taxis also go by the name of Key Cabs. In total, Taxifast operates around 400 taxi cabs and has become the biggest taxi group of its kind, in the whole of the south-west. Taxis can be booked in advance by telephone, and are also available at the various taxi ranks around the city, including those outside of Plymouth's bus and train stations. Vehicles include people carriers, executive cars and adapted transport suitable for wheelchair users.