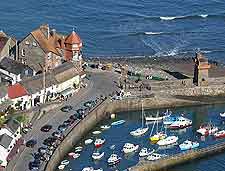 Famous for its stunning views of the North Devon coastline and endless pathways, the towns of Lynton and Lynmouth are connected by a historical water-powered Cliff Railway, which is heavily used by both locals and visitors alike. The Cliff Railway connects Lynton with the considerably lower beachfront town of Lynmouth, saving tourists a tiring walk between these two towns.

Lynton and Lynmouth reside within the vast Exmoor National Park, which has become the natural setting for a number of acclaimed novels, such as Lorna Doone and Tarka the Otter. A harbour once used by smugglers and lying where the forested gorge of the winding West Lyn River joins with the seafront, these towns have irrefutable charm and a very comprehensive Tourist Information Centre (TIC), which resides within Lynton Town Hall, a grand mansion-like building opened at the turn of the 20th century and gifted to the community by Sir George Newnes. 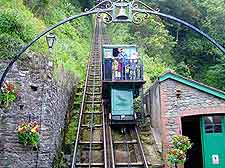 As summer holiday makers and tourists flood into the towns, it is Lynmouth beach where most head first, to either sunbathe, dig in the sand and shingle, or enjoy the exceptional rock pooling available here. Next perhaps would be a trip to Lynton on the almost legendary Cliff Railway, and then maybe a stroll along a pathway with dramatic coastal panoramas. Families with their own car contemplating what to do next can always take a short drive to the Exmoor Zoo or the Exmoor Falconry, before taking a ride on the heritage attraction that is the restored Lynton and Barnstaple Steam Railway. More information about Lynton and Lynmouth Tourist Attractions. 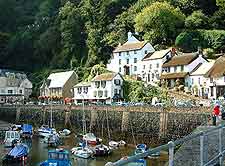 All around Lynton and Lynmouth are sights and buildings of great character, many of which date from the late 19th century and are traditionally Victorian in their appearance. Two exceedingly popular National Trust properties close to these towns are Watersmeet House and Arlington Court, while Mother Nature has provided some of the most jaw-dropping sights herself. Simply take a trip to the Valley of the Rocks and you will be overwhelmed by its sheer natural beauty and drama. The walking trails throughout the Exmoor National Park are also recommended, being particularly scenic around the neighbouring Doone Valley and the Glen Lyn Gorge. More information about Lynton and Lynmouth Landmarks and Monuments. 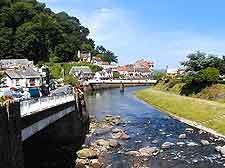 Tourists who have enjoyed their time in Lynton and Lynmouth may like to learn a little more about these towns, and the Lyn and Exmoor Museum is the place to come for information about days gone by. As well as its extensive agricultural tools, Exmoor kitchen paraphernalia and fossils, it is the information about the disastrous flood of 1952 that tends to be the most memorable exhibit for most visitors. In Lynmouth, the Exmoor National Park Visitor Centre is another museum-like attraction and documents the tale of the Louisa lifeboat and its dangerous mission at the Porlock Weir, which took place in 1899 and is still talked about today. More information about Lynton and Lynmouth Museums. 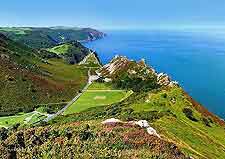 Since the Exmoor National Park is abounding with magical scenery and views at almost every angle, time should be allowed to take a day trip or two around this park, with excursions to Dulverton, Dunster, Exford, Porlock, Simonsbath and Watchet all being very popular indeed. Lying to the east of Lynton and Lynmouth, and on the outskirts of Exmoor, the seaside resort of Minehead is often appealing, as is the westerly town of Ilfracombe and its innumerable nearby attractions, which include Chambercombe Manor, Woolacombe and boat trips to Lundy Island. The city of Exeter lies directly to the south and is known for its cathedral and university. For some serious shopping within easy reach of Lynton and Lynmouth, the south-easterly town of Taunton is hard to better. More information about Lynton and Lynmouth Attractions Nearby.