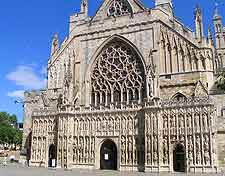 Even though many of Exeter's buildings and medieval churches were badly affected during the Blitz bombing, the principal landmarks in the city are still very much in existence. The majestic Exeter Cathedral is without doubt the city's number one landmark and exudes a tremendous Gothic character, being a very notable Anglican church and also known as the Cathedral Church of St. Peter.

The Guildhall is another impressive landmark in city and is more than 800 years, while the University of Exeter also contains a collection of eye-catching buildings, such as the rather contemporary Peter Chalk Centre. Also of note and each with their own place in history are the Custom House, Rougemont Castle, the St. Nicholas Priory and Tucker's Hall. 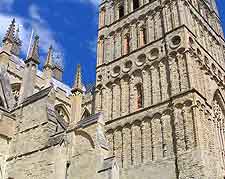 Address: 1 The Cloisters, Exeter, Devon, EX1 1HS, England, UK
Tel: +44 01392 255573
Exeter Cathedral is an important city centre landmark and dates from the mid-13th century. The cathedral has remained relatively untouched for the last 600 years, apart from some damage sustained during a bombing raid in the Second World War. The architecture appears very elegant and graceful, and is further enhanced by the cathedral's famous East Window and its beautiful stained glass. A feeling of airiness and space is created by the high vaulted ceiling, which boasts the longest uninterrupted stretch of its kind in existence, anywhere in the world. The entrance on the Great West Front is surrounded by a wealth of 14th-century stone sculptures, which depict kings, queens and religious characters.
Open hours: Monday to Saturday - 09:30 to 16:45, weekly and Sunday services available
Admission: charge, discounts for students and seniors, children under 16 years are free 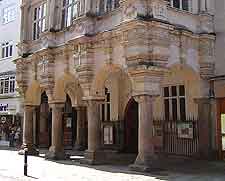 Address: High Street, Exeter, England, EX4 3EB, Devon, UK
Tel: +44 01392 665500
Completed in 1160, the Guildhall in Exeter is actually England's most historical municipal building and has played a central part to civic life in the city for many centuries. Much of the landmark's present appearance was the result of building work carried out during the 14th century, although the striking stone pillars supporting the entrance roof (a portico) were added much later, in the late 17th century. Look out for the exquisite oak panelling in the hall, along with the stone carvings of grotesque animals and a valuable collection of silver, local treasures and regalia.
Open hours: arrange in advance, hours can vary according to civic functions and council meetings
Admission: free 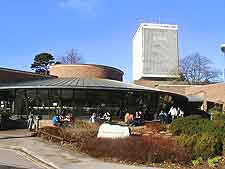 Address: Streatham Campus, Northcote House, Exeter, Devon, EX4 4QJ, England, UK
Address: St. Luke's Campus, Heavitree Road, Exeter, Devon, EX1 2LU, England, UK
Tel: +44 01392 262524
The University of Exeter is made up of two separate campuses in the city (Streatham and St. Luke's), as well as a further campus located in Tremough, Cornwall. Founded as a small local college in 1840 and granted university status in 1955, Exeter University has grown greatly in size and stature, and now accommodates roughly 15,000 students and around 2,750 staff, and comprises 12 schools. Streatham operates as the main campus and is home to some beautiful gardens and important buildings, such as Devonshire House, Reed Hall and the Northcott Theatre.
Open hours: daily
Admission: free 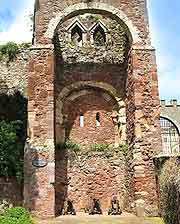 Address: Castle Street, Exeter, Devon, EX4 3PU, England, UK
Erected in 1068 and built specifically for William the Conqueror, Rougemont Castle is a small Norman fortress and stands on the site of ancient Roman ruins. Rougemont Castle is named after the red stone used in its construction and is partly ruined, with its remaining Georgian buildings being used by Exeter's crown and county courts until 2006. A small plaque is sited close to the gatehouse and contains some interesting information about the last person ever executed in England for witchcraft, who was imprisoned here in the latter part of the 17th century, for her suspected involvement in black magic. The future of Rougemont Castle is not yet confirmed, since it has recently been sold for an estimated £1.5 million and is most likely to be converted for commercial use of some kind.
Open hours: not currently open to the public, view from outside only
Admission: free 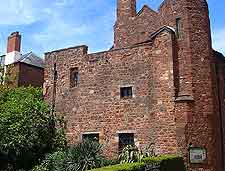 Address: The Mint, Fore Street, Exeter, Devon, EX4 3BL, England, UK
Tel: +44 01392 665858
The Benedictine Priory of St. Nicholas was founded in 1087 as a local monastery and stands in the very heart of Exeter, where it provides the chance to experience a taster of typical Tudor life. This important local landmark now serves as a museum-type attraction and is filled with period antique furnishings, replicating its former appearance in the early 17th century, when it was used as a private residence by the affluent Hurst family. St. Nicholas Priory stands in the centre of the Mint - a pedestrianised passageway connecting Bartholomew Street with Fore Street, and has many fascinating artefacts, as well as a popular gift shop.
Open hours: Monday to Saturday - 10:00 to 17:00
Admission: charge, discounts for children, seniors, guided tours and workshops 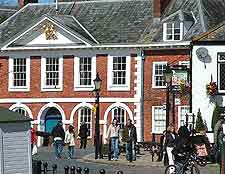 Address: Quay Hill, Exeter, Devon, EX2 4AN, England, UK
Tel: +44 01392 665700
The Custom House resides is the vibrant Quay area, where it is the most historical brick building in the entire city. Built in the latter part of the 17th century and used by Customs and Excise until as recently as 1989, Custom House has an interesting exhibition about its architectural history, development and restoration, which was completed in 2008 and cost upwards of £1 million. Visitors should be sure to look upwards, to admire the ornate lime plasterwork on the ceiling and also the grand staircase.
Open hours: April to October, Sunday - 14:00 (guided tours)
Admission: free 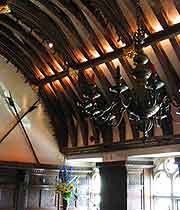 Address: 140 Fore Street, Exeter, Devon, EX4 3AN, England, UK
Tel: +44 01392 412348
Standing on Fore Street and dating back to 1471, Tuckers Hall is now a Grade II listed landmark and was formerly a chapel, being built for the city's guild of the weavers, tuckers and shearers (the woollen cloth workers). Soon after, this medieval building began to function as a meeting space and guildhall for the weavers, and was modernised by the Victorians in the 1870s. Exeter is very famous for its historical woollen textile industry, and in the early 18th century, was actually responsible for some 25% of England's overall output. Today, Tuckers Hall serves as an important reminder of this past, highly skilled trade.
Open hours: June to September, Tuesday, Thursday and Friday - 10:30 to 12:30; October to May, Thursday - 10:30 to 12:30
Admission: free