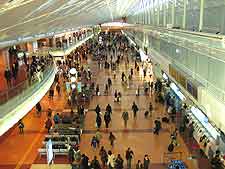 Located within the Ota district, which sits along Tokyo Bay's southern shores, Tokyo International Airport was the main hub of international arrivals until Narita International was opened in the early 1970s. Since then, Haneda Airport, as it is now known, has been until recently a solely domestic route destination. Even so, this is still one of Asia's busiest air hubs, handling an annual passenger throughput of around 65 million.

Two of Japan's largest airlines providing domestic flights, Japan Airlines and All Nippon Airways, have their bases here, as does Hokkaido International Airlines, a popular low-cost, no-frills Japanese carrier. The complex hosts three terminals and underwent a major expansion in 2010, enabling it to potentially cope with up to 90 million passengers each year. The redevelopment included a third terminal. This five-storey international facility is linked to the Tokyo Monorail and Keikyu overland rail services, and offers flights to South Korea, Russia and China, departing between 23:00 and 07:00.

The airport is located within the commercial and exhibition district of the city, with easy road access via the Bayshore Route section of the Shuto Expressway, which runs past Tokyo Bay's famous bridge. The journey time depends on traffic conditions, with the elevated sections of the highway becoming rather congested at rush hours.

The most comfortable form of bus travel from Haneda to Tokyo destinations is by limousine bus. These buses leave regularly from the terminals to major hotels in all districts, with journeys taking an hour or more. For onward journeys, taxis are easily found at the hotels. Local buses and shared minibuses also run to all of the city's principal districts.

The monorail serves all three terminals and links with the Yamanote, the Keihin Thoku and the Toei Oedo lines at its terminal, the Hamamatsucho Station, with a journey time in the region of 16 minutes. Overground Keikyu line trains run from the airport to the Shinagawa Station for connections to most city districts, with some early morning trains running direct to Narita International Airport via the Keisei main line.

Metered taxis are found at stands outside the Arrivals halls of all terminals or can be booked in advance online, although travellers should note that lengthy taxi trips will be pricey. Limousine hire is also available.