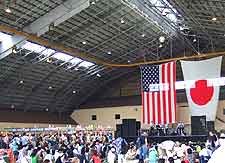 Tokyo observes a wealth of festivals throughout the year with celebrations ranging from religious ceremonies to international film festivals. The Japanese Beer Festival is particularly popular with visitors, as is the Sanja Matsuri Festival, which takes place in May.

Other highlights in Tokyo's calender of things to see and do include Gion Matsuri, held during July, and in August the week-long Samba Carnival, which attracts huge crowds from all over the world. New Year's Eve is a time of celebration in Tokyo and everyone visits their local temple to pray.