Tokyo Weather, When to Go and Climate Information 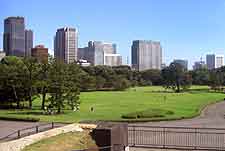 With traditional seasonal weather, the climate in Tokyo is favourable for much of the year, and even during the winter months, the daytime temperatures are fairly high and usually remain above 10°C / 50°F, with only occasional dustings on snow. However, when the summer climate arrives in Tokyo, the city soon warms up and highs regularly top 30°C / 86°F, with record tropical temperatures being recently recorded in the Adachi district, where they exceeded 40°C / 104°F.

To cope with the summer heat and sunny weather, most hotels in Tokyo come with air conditioning as standard, and shopping malls and department stores almost overcompensate and can often feel surprisingly chilly at this time of the year. Both June (rainy season) and September (typhoon season) tend to be the wettest months and as a result, this extra humidity can create a 'muggy' feeling. 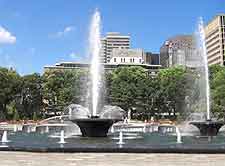 The hot summer temperatures in Tokyo are a direct result of the cities size and modern high-rise developments, with the vast areas of brick, concrete and asphalt retaining much of the daytime heat well into the night, together with the additional heat caused by the many millions of cars around the city.

Whilst the summer climate in Tokyo may be a little too hot for some people, the nights are especially pleasant and between June and September, temperatures stay well above 20°C / 68°F. As a result of the warm, balmy evenings, much of Tokyo really comes to life after dark and many nightspots quickly fill at this time of the year, together with many seasonal celebrations and firework displays. Summer showers don't usually last long and a folding umbrella will more often than not suffice during any rainy weather.

Tourists often choose to visit Tokyo during either the spring or fall season. From March to May, the climate in Tokyo is especially inviting, with temperatures ranging from 15°C / 59°F to 23°C / 73°F, or more. The plum and cherry blossoms are also not to be missed in the spring months, while the maples and autumn shades are equally impressive between late September and November.