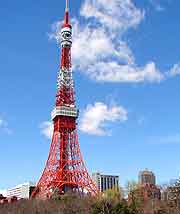 Tokyo is a melting pot of different styles. Some of its most important landmarks date back hundreds of years, while others, such as the breathtaking Tokyo Tower, are just a few decades old.

You will be impressed by the shrines and particularly inspired by the views afforded from the Tokyo Tower, a true iconic landmark, but for some real culture, visit the Kaminarimon, a 1,000-year-old gate in the heart of Asakusa. 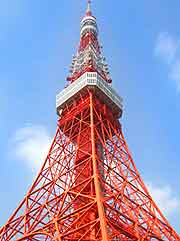 Address: 4-2-8 Shiba-Koen, Tokyo, 13 105-0011, Japan, JP
Tel: +81 033 433 5111
Tokyo Tower was constructed in 1958 and stands at an impressive 333 metres / 1,093 feet, 13 metres / 43 feet higher than the Eiffel Tower. The tower is amongst the city's most breathtaking man-made landmarks and boasts two viewing platforms, from which you can get panoramic views across Tokyo and Mount Fuji. Inside the tower, you will also find the popular Tokyo Tower Wax Museum, the Mysterious Walking Zone and the Trick Art Gallery.
Open hours: daily - 09:00 to 20:00, seasonal variations apply
Admission: charge

The tiny hill of Benten-yama is home to a shrine to the goddess of good fortune. This shrine is the site of the belfry. The bell once tolled the hours for the people of the district and it is said that it could be heard for a radius of no less than 6 km / 4 miles. The bell still sounds at 06:00 every day, as well as on New Year's Eve.
Open hours: daily - 06:00 to 18:00
Admission: no charge 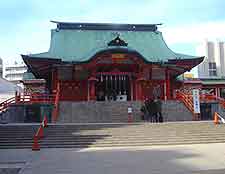 Address: 5-17-3 Shinjuku, Tokyo, Japan, JP
Tel: +81 033 209 5265
Constructed in the early Edo period, Tokyo's Hanazono Jinja shrine boasts a particularly long and interesting history. One of the deities of the shrine is Yamato-takeru-no-Mikoto, a 4th-century imperial prince who has become a popular hero in Japanese mythology. When he died, some locals believe that his soul was transformed into a swan, and that he flew away into the night. Many people choose to visit the Hanazono Jinja shrine to pray for success in business.
Open hours: daily - 06:00 to 18:00
Admission: no charge Address: Kaminarimon, Taito-ku, Tokyo, 111-0034, Japan, JP
Kaminarimon is the first and most impressive of two large gates, which lead to Sensoji Temple. This striking landmark gate was constructed over 1,000 years ago, and has since become the symbol of Asakusa. The Nakamise shopping street leads from Kaminarimon into the grounds of the temple.
Open hours: daily - 24 hours
Admission: no charge

Address: 2-3-1 Asakusa, Tokyo, 13 111-0032, Japan, JP
Tel: +81 033 844 1575
Legend has it that over one millennium ago, the Hirokuma brothers found the statue of Kannon in their fishing nets and the village chief dutifully enshrined it. The Asakusa Shrine was consequently established in the mid-17th century and legend says that the three brothers became gods of the shrine. This is without doubt the most famous shrine in Tokyo, also playing host to the Sanja Festival in May.
Open hours: daily - 06:30 to 17:30
Admission: no charge 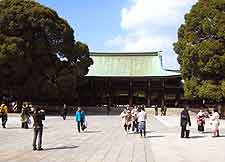 Address: 1-1 Kamizono-cho, Tokyo, 13 151-0053, Japan, JP
Tel: +81 033 379 5511
This shrine is a prime example of Shinto architecture and was first opened in 1920 to commemorate the death of Emperor Meiji. It is surrounded by approximately 173 acres / 70 hectares of land with shady trees and a variety of Japanese plant life. Tokyo's Meiji Jingu Shrine is one of most sacred within the whole of Japan and worthy of some time. The Imperial Treasury House annex can be found on the grounds and displays mementos from Emperor Meiji's reign.
Open hours: daily 06:00 to 17:00, seasonal variations apply
Admission: no charge