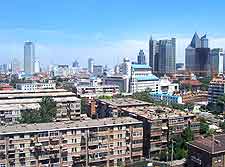 Being so close to Beijing, Tianjin has always had close links to this neighbouring city, which lies to the north-west. Over the years, the fortunes and prosperity of these two prominent cities has been closely connected and Tianjin has also been especially important, due to its nearby port and setting alongside Bohai Bay and stretch of the historical Grand Canal.

Tianjin is a spreading municipality, with many large expanses of rural areas and farmland. Various sights, tourist attractions and monuments are dotted all over the city, although Tianjin city centre itself is fairly compact and easy to walk around. Central Tianjin is divided by the Hai River and this is a useful point of reference, with the railway station lying to the north of the river.

With striking European-style architecture, many grand buildings and mansions, lively antiques markets and ancient temples, it is easy to see why Tianjin has become such an appealing tourist destination. Both the China International Travel Service (CITS) and Tianjin Tourism Bureau lie along Youyi Lu and are useful places for the latest information about the best tourist attractions, public transport, English-language maps and more besides. 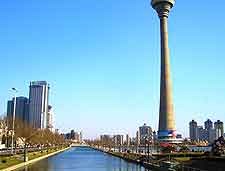 Within the city of Tianjin, you will find a host of top tourist attractions awaiting. Highlights include the Ancient Culture Street - a group of streets known for their appealing Qing-style architecture and nearby Tianhougong Temple; the lively Antiques Market - a bustling area along Shenyang Jie, full of local market traders selling a range of collectables; Dabei Monastery - located on the northern side of Tianjin and home to a number of impressive Buddhist statues; the 18th-century Grand Mosque - an important part of the local Muslim community with many elaborate carvings; the many Chinese tea houses - a chance to experience the ancient ritual of tea making in China; and the Seaside Amusement Park - with fast water slides, a heated pool and a large man-made beach area. If you are looking for an area of green within Tianjin, then visit Beining Park, Central Park and also the Shuishang Park, which is home to a scenic lake and an amusement area. More information about Tianjin Tourist Attractions. 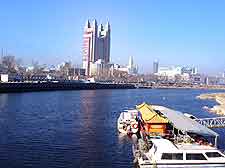 Also within the city of Tianjin are many eye-catching landmarks, some of which are hard to miss. The most popular sights include the 15th-century Confucian Temple - the city's biggest shrine and often referred to as 'Wenmiao'; Dule Temple - a short drive from central Tianjin and more than 1,000 years old, honouring the Chinese goddess of mercy; the Great Wall of China at Huangya Pass - a long stretch of this world-famous structure, affording some truly remarkable views; the Temple of Great Compassion - a magnificent Buddhist monastery sited within the Hebei district; and Tianjin Radio and TV Tower - the third tallest structure in the world, featuring an observation area and superb cityscape views. More information about and Tianjin Landmarks. 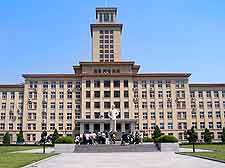 If you are looking for cultural tourist attractions within Tianjin, the city's many museums and galleries will be top of your list. Particularly notable is the enormous Tianjin Museum, which boasts a 150,000-piece collection of various treasures and information about the city's evolution, while the Museum of Science and Technology suits all the family and features a planetarium. Also popular are the fossils and palaeontology exhibits at the Tianjin Natural History Museum, and the Tianjin Fine Art Museum - where you will find a range of paintings, sculptures and relics from the Yuan and Qing dynasties. More information about Tianjin Museums and Tianjin Art Galleries. 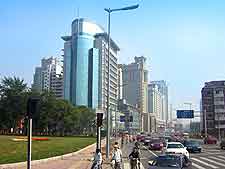 Tianjin has become an extremely popular tourist destination and has plenty to keep you occupied during your stay. However, if you choose to venture outside of the city, Beijing is amongst the most popular excursions and lies to the north-east. Also nearby, Tanggu lies within the Tianjin municipality and is home to a major seaport, where regular passenger ferries arrive and depart. More information about Tianjin Attractions Nearby.