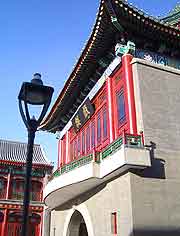 A mixed selection of sights, locations and venues make up Tianjin's main tourist attractions, with a distinct cultural theme pertaining to the majority.

Aside from a small amusement park within the Shuishang Park, you won't find glitzy, purpose-built entertainment centres and tourist attractions, but few visitors come to a city with as much heritage as Tianjin expecting to find these things.

Look out for the colourful Antiques Market along Shenyang Dao, the Ancient Culture Street on the northern side of Tianjin, and the many traditional Chinese tea houses, where the rituals and ceremonies are as important as the tea itself. 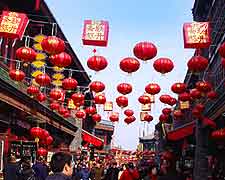 Address: Beima Road, Tianjin, 300010, China, CN
Tel: +86 022 2835 8812
The Ancient Culture Street is in fact a collection of streets offering traditional Qing-style architecture and décor of a typically Tianjin style. Shops on the streets feature delicately carved bricks and watercolour paintings and should you venture in, you will find unique attractions such as fine artworks, handicraft tools, calligraphy brushes and kites. Nearby is the Tianhougong Temple, often referred to as the Heavenly Empress Temple and dating back to the time of the Yuan Dynasty (1279 to 1368). A Confucius temple, built during the Ming Dynasty (1368 to 1644), is also nearby.
Open hours: daily - 09:00 to 23:00
Admission: no charge 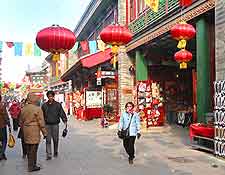 Address: Shenyang Dao, Tianjin, 300000, China, CN
Tel: +86 022 2835 8812
Known locally as Jiuhuo Shichang, Tianjin's bustling antiques market is located in the centre of the city, running along Shenyang Jie and also encompassing some of the side streets. This lively market offers a wide selection of aged items with collectable or nostalgic value, and includes stamps, coins, jewellery, snuff boxes, teapots and items connected to Chairman Mao. Sunday morning is the best time to visit the market if you really want to see it in full swing.
Open hours: daily - early morning until late afternoon
Admission: no charge 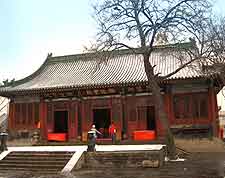 Address: 40 Tianwei Road, Tianjin, 300010, China, CN
Tel: +86 022 2835 8812
Situated in the north of Tianjin, Dabeiyuan Monastery is a fine example of a classical Chinese Buddhist monastery and is also the busiest religious facility of its kind in the city. Visitors can enjoy the magnificent architecture before venturing in to appreciate the monastery's collection of Buddhist statues, relics and historical attractions, some of which date as far back as the 3rd century AD.
Open hours: daily - 08:00 to 16:00
Admission: no charge

Address: Dasiqian Street, Tianjin, 300011, China, CN
Tel: +86 022 2835 8812
The focal point of the Muslim community in the city of Tianjin is the Grand Mosque, which visitors will find situated at the intersection of Xima Lu and Beima Lu. Dating back to the 18th century, this magnificent building has a predominantly Chinese architectural style, although inside of the mosque, the ornate carvings mix both Chinese and Islamic influences. Visitors are asked to show the appropriate respect when entering the mosque - women should cover arms and legs and men should dress modestly also.
Open hours: daily
Admission: no charge 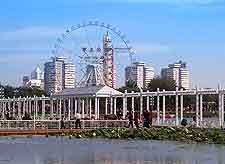 Address: Haifiang Road, Tianjin, China, CN
Tel: +86 022 2531 9020
The Tanggu area, on the southern outskirts Tianjin, is home to one of the city's top family attractions, the Seaside Amusement Park. Sited alongside the Bohai Gulf, this popular theme park is full of water slides and also boasts a large heated pool and an enormous artificial sandy beach area, all of which are perfect for a sunny day.
Open hours: daily - 24 hours
Admission: charge

Join others at one of Tianjin's many authentic Chinese tea house attractions and get to observe the ancient rituals of preparing, smelling and tasting the tea. A waitress known as a 'cha si' gives a presentation, following which those attending are invited to sample the tea and given the chance to purchase any of many fine Chinese teas.
Open hours: daily
Admission: no charge