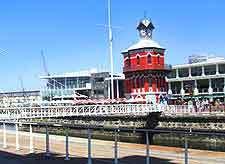 Whether you're looking for a street snack, somewhere to eat breakfast or a memorable evening meal at a plush restaurant, there's plenty of choice in Cape Town. Dining venues and all kinds of restaurants abound, and so too do types of cuisine, quality of food on offer and choice of decor.

Cafes in Cape Town range from the rustic to minimalist chic, and are great if you want to grab a sandwich or simply soak up the atmosphere. Relax over a meal in one of Cape Town's more informal brasseries, sample the lively party atmosphere of many of its contemporary restaurants, or simply enjoy the plethora of local and international cuisine on offer in the city's many trendy eateries. 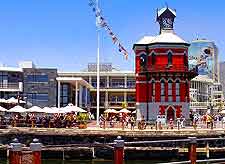 Restaurants generally serve lunch between 11:30 and 15:00 and dinner between 19:00 and 22:00. Most are open throughout the week, although it's worth checking ahead if you're planning to eat on a Sunday.

Cafes in Cape Town tend to open during the day only, between 07:00 and 17:00. At weekends, in particular, it's worth reserving a table in advance as many of the more popular restaurants fill up quickly.

There's no such thing as a single traditional Cape Town cuisine. Instead, traditional dishes are a rich and varied mixture that have evolved over centuries of different cultural influences, from French and German to Malaysian and Indonesian. 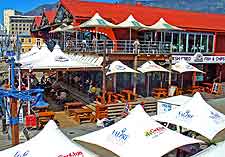 A couple of delicacies which are of Malayan origin are a stew made with water hyacinths, known as 'waterblommetjlesbredie', and 'bobotie', a sort of shepherd's pie with a spicy kick. Curries are particularly plentiful, including 'bunny chow'. The Afrikaan influence is evident in the city's many sausage dishes, such as 'boerewors'.

Cape Town's proximity to the coast means that there's usually a bewildering array of fresh fish and seafood on offer, including crayfish, octopus and occasionally, perlemoen. Also popular on restaurant menus is 'springbok', a sort of venison.

The temperate climate on the peninsula means that fruit and fresh vegetables are in plentiful supply. A favourite dish to be found on many menus in the city is butternut squash soup.

Cape Town offers a great range of dining venues, whichever district of the city you happen to find yourself in, from sophisticated restaurants to traditional - and much more casual - African cafes. However, it has to be said that the most popular eateries are located mainly in and around Heritage Square, Greenmarket Square and St George's Mall. Also worth a visit are restaurants and cafes on Church Street in City Bowl, Main Road in Green Point and Kloof Street in the Gardens District of Cape Town.

If you want to sample the fruits of the oceans that surround the Cape Peninsula, then a visit to one of Cape Town's many fish restaurants is a must. Take a trip out to Mariners's Wharf in Hout Bay, or head down to the Victoria and Albert Waterfront and enjoy some good old English-style 'fish and chips'.

For visitors who want to treat themselves, then afternoon tea served at the prestigious Mount Nelson hotel restaurant is an absolute must.