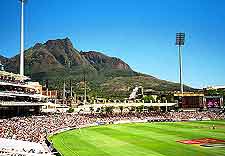 Cape Town offers a packed calendar of events throughout the year, giving the city a real buzz. As well as a large number of sporting and outdoor events, Cape Town also hosts a vast array of music concerts, and food and wine festivals.

Many attract people from all over the world, offering a huge choice of things to do, all through the year. Plan your visit to Cape Town carefully and you may well be able to add at least one or two of the city's festivals and celebrations to your itinerary.