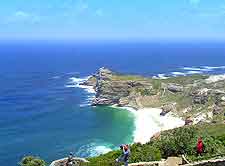 With so many attractions of its own, you may question the need to head out of Cape Town and venture further afield. Certainly, there's more than plenty to do in and about the centre and nearby suburbs of Cape Town.

However, the occasional day trip into the Peninsula and to the northern winelands more than amply rewards the adventurous visitor, with a good choice of attractions to be found within locations such as Franschhoek, Hermanus, Langebaan, Paarl, Stellenbosch and the Cape of Good Hope Nature Reserve, amongst many others. 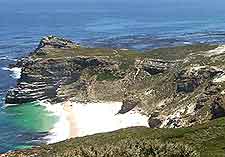 Tel: +27 (0)21 780 9010 / 11
Email: info@capepoint.co.za
Website: www.capepoint.co.za
Declared a nature reserve in 1939, this area has managed to resist over-development and protect its many native species of flora and fauna. As well as natural attractions in abundance, the area around Cape Point is spectacularly scenic. Look out for the two lighthouses, the lights of which on a clear day can be seen for miles and are an important landmark for ships rounding the Cape. There's also a hiking trail at the Cape of Good Hope Nature Reserve, for those who want to stretch their legs.
Open hours: October to March, daily - 06:00 to 18:00; April to September, daily - 07:00 to 17:00
Admission: charge, discount for children

Some 120 km / 75 miles to the south-east of Cape Town, nearby Hermanus is a whale-watchers' paradise. Originally a small fishing village, the town has grown thanks largely to visitors' desire to catch a glimpse of these fascinating mammals and partly thanks to the town's annual whale-watching festival, held during the summer holidays. The town itself is rather pleasant to walk around, particularly out of season.

Some 46 km / 29 miles from Cape Town, Stellenbosch is South Africa's second-oldest European settlement. There's still a great deal of evidence of its 17th-century origins in the form of some fine examples of colonial architecture. The town is also situated at the heart of South Africa's wine industry. The 'Stellenbosch Wine of Origin' area covers over 100 cellars. Enjoy a visit to one of them or simply stroll around the town's main streets, lined by oak trees. The university in Stellenbosch, which has helped to produce many of South Africa's sporting legends, lends the town a lively atmosphere.

Some 56 km / 35 miles from Cape Town, Paarl is home to several vineyards, including the Kooperatieve Wijnbouwers Vereeniging. Whilst the town's vineyards may be its major attraction, Paarl also offers plenty of other things to see and do, including museums, historic buildings and the nearby Paarl Mountain Nature Reserve.

Some 127 km / 79 miles from Cape Town, Langebaan remains a popular day trip destination with both local Capetonians and visitors alike. The town boasts some good beaches, swimming and sailing attractions, as well as plenty of places for those who want to dine out. However, Langebaan is perhaps best known as a base for visiting the nearby West Coast National Park. A beautiful lagoon is just one of its many attractions. The area is home to an impressive range of seabird life, as well as its wild flower display, best viewed during in springtime.

Franschhoek is widely regarded as the culinary capital of South Africa. As you'd expect, the town's main attractions are its restaurants and wineries. After your meal, if you've still got some energy, Franschhoek has plenty of shops and galleries for you to while an afternoon and catch up on souvenir shopping.