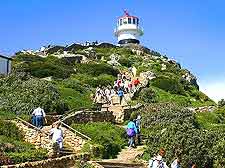 Sightseeing in Cape Town inevitably means that you will have to make a few choices. If you've only a few days in the city, then you may well opt to stay mostly in the city centre, soaking up the atmosphere and enjoying the numerous tourist attractions of this historic city and waterfront district. In fact, tourists will find that most of the attractions in central Cape Town can be best explored on foot.

If you can stay longer, then you will have more of an opportunity to visit tourist attractions which lie further afield, including Cape Town's suburban districts and beaches. Either way, there's certainly plenty to keep the whole family entertained.

Address: 25 Queen Victoria Gardens, Cape Town, South Africa, ZA
Tel: +27 021 481 3900
Housed within the same building as Cape Town's South African Museum, the Planetarium offers audiences of all ages a chance to enjoy some celestial theatre. A wide variety of shows and related attractions are on offer, from those aimed at the under-10s to weekend lectures for grown-ups. The domed auditorium can also recreate the night sky.
Open hours: daily - 10:00 to 17:00
Admission: charge 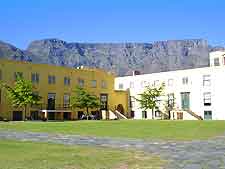 Address: Buitenkant Street, Cape Town, South Africa, ZA
Tel: +27 021 787 1249
More of a fort than a castle as such, the Castle of Good Hope was built by early Dutch settlers in the 17th century. Before the reclamation of coastal land, the castle actually sat right on the coast, hence the name of nearby Strand Street.
Open hours: daily - 09:00 to 16:00
Admission: charge

Address: Dock Road, Cape Town, South Africa, ZA
Tel: +27 021 418 3823
Widely regarded as one of the best in the world and rated as one of Cape Town's top tourist attractions, the Two Oceans Aquarium boasts a massive collection of some 300 species of fish. All are native to the Indian and Atlantic Oceans. The aquarium's star attraction is the vast Open Ocean Tank in which sharks, rays and a myriad of sealife can be viewed. The sharks may be popular, but few can resist the comical penguin beach either.
Open hours: daily - 09:30 to 18:00
Admission: charge, children under four years of age are free

Address: Nelson Mandela Gateway / Robben Island, Cape Town, South Africa, ZA
Tel: +27 021 413 4200
This UNESCO World Heritage Site is a short ferry trip across Table Bay. The infamous prison's most famous inmate was, of course, Nelson Mandela. Tours around the prison are given by former political prisoners. A thought-provoking museum gives the history of the island, which has also been used as a leper colony. Robben Island is a peaceful and rather beautiful place today, home to colonies of seals and penguins.
Open hours: ferries depart daily - 09:00 to 15:00 (weather permitting)
Admission: charge

Address: Church Square, Cape Town, South Africa, ZA
Tel: +27 021 461 7044
The Groote Kerk is probably the best-known church in South Africa. Built in the 19th century on the site of an earlier Dutch reformed church, the Groote Kerk has some particularly interesting attractions. Look out for the lockable pews, huge pulpit, the 6,000-pipe organ and an unusual soapstone floor - beneath which are said to be buried some 200 people.
Open hours: Monday to Friday - 10:00 to 14:00; Sunday - 10:00 and 19:00 services
Admission: free guided tours on request

Address: Parliament Street, Cape Town, South Africa, ZA
Tel: +27 021 403 2266
Whilst a visit to the home of South Africa's parliament may not be at the top of your itinerary, it's certainly worth taking a little time to explore this historic building. If you arrange an afternoon visit, it's possible that you will be able to see South Africa's politicians in action.
Open hours: Monday to Friday - tours by appointment
Admission: free