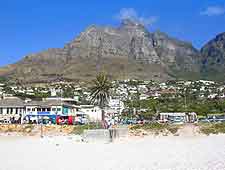 The beaches of Cape Town are just simply awesome and a great reason to come to this part of South Africa. However, many stretches of the coastline are rocky, and the strong tides mean that swimming can be dangerous.

Sea Point is one such place in Cape Town, where although swimming in the sea itself is not possible, two large tidal swimming pools have been created, meaning that this beach is highly suitable for families. Cape Town also provides some outstanding locations for scuba diving, both next to the shore and further out, and the surfing possibilities are awesome, with some beaches boasting truly monster waves, suitable for expert surfers only.

The following beaches are located around the Cape Peninsula's Atlantic Coast:


False Bay
The beaches of False Bay lie on the south-easterly outskirts of Cape Town and whilst they may not be the prettiest or most fashionable spots when compared to those on the Atlantic side, they are quieter, and the water here is considerably warmer, being quite suitable for swimming. Popular beaches include those around Kalk Bay, St. James, Muizenberg and Simon's Town. 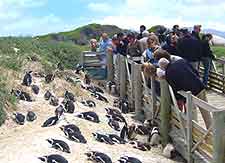 Boulders Beach offers the perfect day trip and something to be remembered, and is situated right next to Simon's Town (Simonstad), just a short drive from Cape Town.

Tourists flock to Boulders Beach each year not only because the water tends to be slightly water and the scenery quite breathtaking, but to enjoy the friendly and rather comical black and white penguins, which live here is great numbers. Boulders Beach really does belong to its penguins, which have taken over the whole area and even nest in the gardens of some nearby houses.