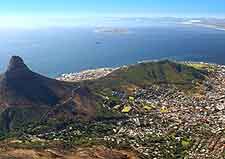 Think of Cape Town and, in all likelihood, a picture of Table Mountain will spring to mind. Certainly, this is Cape Town's main landmark. However, there are plenty more wonderful natural landmarks and man-made monuments to see during your stay in this beautiful city.

Lions Head and Signal Hill also dominate the city and offer stunning views to match. Cape Town's historic monuments are just as distinctive a part of the city landscape, offering a unique glimpse into South African life, history and politics. 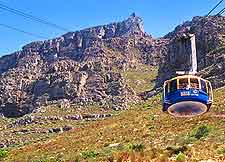 A stroll down this bohemian street in Cape Town's City Bowl is a must for any visitor. Its Victorian buildings house an eclectic mix of boutiques, bookshops, bars and clubs. There are also a number of interesting historic mosques and similar landmarks along the way, including the 18th-century Palm Tree Mosque.
Open hours: daily
Admission: free 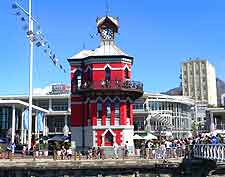 Address: Dock Road, Cape Town, South Africa, ZA
Tel: +27 021 408 7600
Once a rather neglected harbour, the revamped Victoria and Albert Waterfront is now a vibrant cultural and leisure centre, and one of the city's most trendy and appealing modern-day landmarks. Victorian warehouses are home to restaurants, cafes and shops, making this a great both to shop and dine out. Visitors can also enjoy the added bonus of a sail round the docks on a chartered cruise boat. Look out for the very distinctive red Clock Tower and you will be sure that you are in the right place.
Open hours: daily - 24 hours, shops open daily - 09:00 to 21:00
Admission: free

Address: Groote Schuur Estate, Cape Town, South Africa, ZA
On the eastern side of Table Mountain is the Rhodes Memorial, a huge granite reminder of the power and wealth of empire builder, former prime minister and founder of the De Beers Mining Company, Cecil Rhodes. The memorial itself is said to replicate the arch in Hyde Park in London. However, perhaps more memorable are the magnificent panoramic views to be had over Table Bay and False Bay. Visitors can stop off for refreshments at an outdoor tearoom next to the memorial.
Open hours: daily, May to September - 08:00 to 18:00, October to April - 07:30 to 19:00
Admission: free 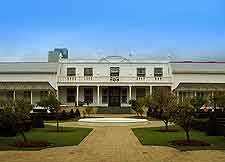 Address: Government Avenue, Cape Town, South Africa, ZA
For those visitors who are interested in South Africa's recent history, this landmark building is of particular significance. This is the place where, in 1992, F.W. de Klerk announced the end of apartheid to the world. The De Tuynhuys building itself has an interesting background. Originally a guesthouse in the 17th century for housing important visitors to Cape Town, it has since been used as an official residence for governors and, later, State Presidents.
Open hours: closed to the public
Admission: free 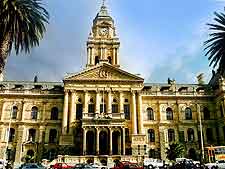 Address: Darling Street, Cape Town, South Africa, ZA
This imposing Edwardian building was the scene of Nelson Mandela's dramatic address to the South African nation on his release from prison. Whilst it is not in the best state of repair, Cape Town's City Hall remains a popular item on visitors' itineraries. The building first opened its doors as a city hall in 1905. Its most notable features include its exterior, dressed in Bath Stone, and a clock tower which is said to be precisely half the size of London's Big Ben. The City Hall is also used as a concert venue by the Cape Philharmonic Orchestra.
Open hours: daily
Admission: free