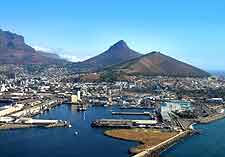 Located in a bowl at the foot of Table Mountain, Signal Mountain and Devil's Peak, Cape Town is reputed to be one of South Africa's most beautiful cities. The city centre district is a relatively compact area and the location of many of Cape Town's major attractions.

The Greater Cape Town area includes a number of the city's suburban neighbourhoods and districts. Although it extends over most of the Peninsula, it's certainly worth taking time out to explore. 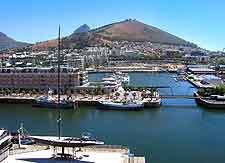 Cape Town's Victorian harbour district, known as the Waterfront, lies just north-west of the city centre. Whilst some visitors may find this recently renovated neighbourhood just a little pricey, it's nevertheless a very popular place to visit - both for its shopping centres and its location as the departure point for ferries to Robben Island. Just along from the Waterfront District is Green Point, squeezed in between the Atlantic coast and the slopes of Signal Hill. The Main Somerset Road is where some of the liveliest clubs and bars in Cape Town can be found and is also a popular meeting point for the gay and lesbian community.

Behind the city centre is the Gardens District of Cape Town. Despite the fact that Gardens is located within easy access to the busy centre of Cape Town, this leafy district is remarkably tranquil. A stroll around the Gardens District is a must-do on most visitors' itineraries as it's home to the National Library, Houses of Parliament and the South African National Gallery. 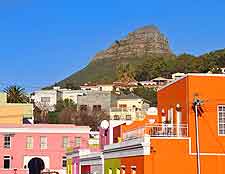 The City Bowl represents the very heart of Cape Town, with many of the city's historical buildings located here. It's also the central business district. The streets are relatively broad and when it comes to architecture, there does seem to be a rather eclectic mix of modern high rises and colonial houses. To the west of City Bowl, next to Signal Hill, lies the colourful Bo-Kaap neighbourhood. With its many mosques and narrow alleyways, it's an interesting place to explore during the day.

Stretching southeast from City Bowl are Cape Town's Southern Suburbs. These include Woodstock, which although rather rundown has some rather charming Victorian bungalows. Observatory is the city's bohemian suburb, easily spotted with its brightly coloured houses and buzzing student bars. Of all Cape Town's suburbs, Constantia rates as the wealthiest. Newlands is perhaps better known for its rugby and cricket connections.

Most Capetonians live in the townships of the Cape Flats District of the city. This neighbourhood extends for quite some distance between Table Mountain and what are known as the Winelands. Whilst at first glance, the neighbourhood may look bleak, these communities have started to thrive in recent years. Many tours of the townships are now available, helping to give visitors a much broader perspective on life in Cape Town.

A far cry from the hustle and bustle of the centre of Cape Town, False Bay is situated right at the southern end of the Peninsula. With small fishing villages and seaside towns featuring among False Bay's many attractions, it's easy to see why visitors who tire of city life flock to this more relaxed part of the peninsula.