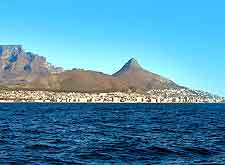 Ever since the end of apartheid in South Africa in the year of 1994, Cape Town International Airport's passenger traffic figures have skyrocketed to an annual average of over eight million. A new common central terminal now conveniently connects the international and domestic terminals of the second-largest airport in the whole of South Africa.

No flight between two African cities is busier than the one between Johannesburg and Cape Town, which was also the fifth-busiest of all air routes on earth in recent years. Another especially popular non-stop flight travels between Cape Town and Durban. However, these are just two among dozens of direct flights arriving and departing from the city's international airport.

This complex was last upgraded just before the city played host to the FIFA World Cup in 2010, which showcased South Africa's 'Mother City' to billions of television viewers. All arrivals enter Cape Town International Airport's split level terminal building from its lower floors, while all departing flights leave from the upper floors.

Address: Airports Company South Africa, Private Bag X9002, Cape Town, Western Cape, 7525, South Africa, SA
Tel: +27 21 937 1200
Cape Town International Airport lies approximately 25 km / 15.5 miles to the east of the heart of this famous city and ranks amongst the principal gateways to South Africa's stunning Western Cape region. The recent expansion of the central terminal building has made it much easier to navigate between the domestic and international terminals.

Although driving in Cape Town can be risky, many believe that the city's public transportation system is even riskier. It takes roughly 30 minutes to travel from the airport to the city centre via the N2 motorway. Car hire reservations should be made well in advance of arriving at Cape Town International Airport. Drivers should be safe in the city as long as special precautions are taken at night - don't lower your windows while stopped and don't flaunt any valuables.

Hotel and other private shuttles are the only buses which travel directly to or from Cape Town International Airport, although the public Golden Arrow bus network connects virtually everywhere else in the city during the day (Golden Arrow passengers should confirm their destination with the bus driver before departure). Each day, roughly six buses depart from the city's main bus station and head to many other South African cities, as well as Windhoek, Namibia's capital.

Visitors wishing to board one of the taxis parked outside of the Arrivals area should stick to the official Touch Down taxi service. Those with bigger bank accounts can hire luxury limousines and VIP bodyguards. More adventurous visitors may wish to join the crowds aboard one of Cape Town's minibus taxis, the preferred transportation means among many locals.