Getting Around, Cincinnati Travel, Transport and Car Rental 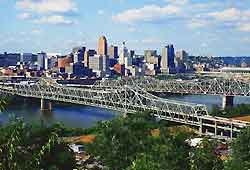 Cincinnati is somewhat of a regional center, making it relatively easy to reach. I-71 and I-75 are the major north-south routes in the Cincinnati area and they converge downtown, while I-74 heads west to Indiana. A busy airport is situated nearby, while coaches, trains and ferries also serve the city, providing transport and plenty of travel options.

Cincinnati Airport is one of the fastest growing in the world and is served by numerous major airlines offering flights across the country. Located 13 miles / 21 km south of downtown Cincinnati, in northern Kentucky, ground transport travel options from the airport include door-to-door shuttles and taxis. For further information, please refer to the Cincinnati Airport page. 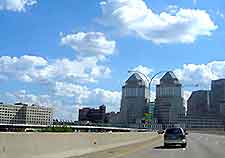 Car rental is available at the airport as well as in and around downtown, with several different companies represented. When driving in and around Cincinnati, remember that the city has the dubious reputation of being 'Crash City' due to its high accident rate, so take care and remain aware. The I-275 circles the city.

Buses travel throughout Cincinnati, while Greyhound offers coach services to many major destinations across the country, with the bus station located downtown and open 24 hours.

Cincinnati's beautiful Union Terminal, also home to the Museum Center, is where the Amtrak's Cardinal stops on its way between Washington D.C. and Chicago. Regular trains depart each day at the Union Terminal and provide fast and affordable travel to many nearby towns and cities.

Hailing a taxi in Cincinnati is not permitted, although taxis are available at hotels throughout the city and at the airport. Many taxis in Cincinnati can also be requested by telephone.

Anderson Ferry was built in 1817 and is now the only remaining ferry making crossings of the Ohio River. Travel by ferry is great way to see the river and Cincinnati's skyline, as opposed to crossing via the bridge.