There are plenty of hotels located in Cincinnati, offering competitive deals and discounts when booked ahead. Popular accommodation enjoys views of the Ohio River, with the most conveniently standing in the very heart of the downtown district, where both the Cincinnati Convention Center and the Paul Brown Stadium are within easy walking distance of lodging.

There are also a number of hotels close to the Cincinnati-Northern Kentucky International Airport (CVG), which is only 13 miles / 21 km south of downtown Cincinnati. Accommodation near to the airport includes the Baymont Inn, the Hilton Garden Inn and the Sheraton, amongst others. Of note, the hotel tax in Ohio is slightly higher than across the border in Kentucky, and so this is reflected in the prices. 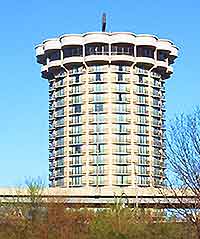 Budget hotels in Cincinnati and are particularly concentrated around Crowne Point Drive, the Mount Carmel Tobasco Road, Pfeiffer Road and Sheraton Lane. Located on the Mount Carmel Tobasco Road are the Days Inn East and the Red Roof East Beechmont hotels, both of which lie close to the US-275 Highway, whilst also being near to the Beechmont Plaza and Cherry Grove Plaza shopping centers.

Mid-range accommodation is spread all over Cincinnati and the quality varies greatly, meaning that tourists often choose to stick to familiar brands. Located on Waterstone Boulevard, on the north-easterly outskirts of the city, is the competitively priced Springhill Suites, while on the eastern side of Cincinnati and just off the Interstate I-275 is the Holiday Inn Eastgate. Rather more central and similarly priced is the Millennium Hotel on West 6th Street, which boasts a prime downtown setting and a staggering 872 guest rooms. Also located within the city center is the Garfield Suites Hotel on Vine Street, which is within easy reach of the Zoological Gardens and the university campus. 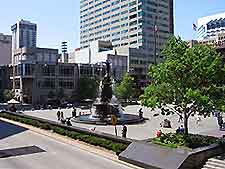 Much of the luxury accommodation in Cincinnati can be surprisingly cheap, with lodging rates often being discounted at the weekend and being quite comparable to mid-range hotels, making it become all the more affordable and enticing.

Well worth considering is the upmarket Hyatt Regency on West 5th Street, which lies between the Fountain Place Shopping Center (east) and Garfield Park (west). Relatively close by, the Hilton Cincinnati Netherland Plaza stands just across from the Fountain Square and its famed for its stylish Art Deco architecture. Particularly impressive is the Cincinnatian Hotel on Vine Street, which is a beautiful Victorian building in its own right and is actually now mentioned on the National Register of Historic Places.