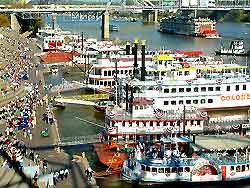 The cultural scene present in the Cincinnati of today is very much of fusion of Italian and German influences, with many of the immigrants bringing various events and beliefs with them from the late 19th century onwards.

Countless annual festivals, concerts and sporting events draw literally thousands to the city each year, being hosted by venues such as the indoor US Bank Arena, the Cincinnati Gardens, the Duke Energy Convention Center, the university's Fifth Third Arena, the Palace Theatre and the Taft Theatre, amongst others.

Established in 2004 and based within the Over-the-Rhine neighborhood, the city's popular Cincy Fringe Festival has grown to become the biggest of its kind in Ohio and lasts for just under two weeks, being a celebration of visual art, music, comedy and theatre. Also at this time of the year is the hugely popular Taste of Cincinnati, where fine cuisine and wine go hand in hand with live music, attracting crowds of more than 500,000 people.