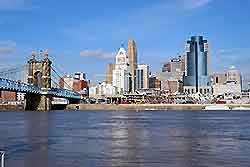 Cincinnati's fine position on the banks of the Ohio River makes for a picturesque setting, while its location in the far southwest corner of Ohio gives the city its historical reputation, as the traditional bridge between the north and south.

The city of Cincinnati overwhelmingly displays more southern character than other cities in Ohio and is divided into a number of notable districts and neighborhoods. Home to a number of fine museums and art galleries, Cincinnati's districts also feature some beautiful 19th-century historic homes, significant landmarks and the state's best theme parks. 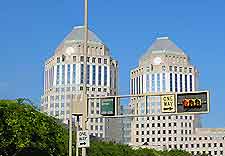 Downtown Cincinnati is a bustling center of activity and the district contains numerous great restaurants, cafés, bars, shopping and entertainment venues. The focal point of the downtown Cincinnati district is the historic Fountain Square, a popular meeting place since 1871. This area is flanked by green hills on three sides and the Ohio River to the south.

Located to the north of downtown, the Coryville district is home to the University of Cincinnati and therefore boasts a ready supply of cafés, coffee houses and cheap eateries. This is the area where Cincinnati's artistic and academic qualities come to the fore.

Located in eastern Cincinnati, the Hyde Park district is the upscale end of the city, exemplified by the clothing boutiques and expensive restaurants that line Hyde Park Square. 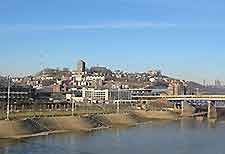 Just east of downtown is this popular neighborhood, known locally as 'the hill'. The Mount Adams district is full of narrow streets and lovely old houses, together with some of Cincinnati's best restaurants and pubs, as well as stunning vistas of the Ohio River.

The Indian Hill district is another of Cincinnati's upper-class suburbs and is where the majority of the city's rich and famous choose to reside. Home to big houses, nice cars and elegant restaurants, Indian Hill is a place to see and be seen.