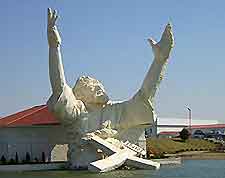 There are many grand churches to be found within Cincinnati, a number of which are extremely historic. Serving the Episcopal Diocese of Southern Ohio, Christ Church Cathedral is one of the most important and in the 1990s enjoyed a major renovation project and rededication ceremony.

Standing directly opposite Cincinnati City Hall and near the old synagogue best known as the Plum Street Temple, St. Peter in Chains Cathedral boasts a single spire, which towers to a height of 220 feet / 67 meters.

Located on 75 North and roughly 90 minutes outside of the city is an impressive sculpture of Jesus, being clearly visible from the Interstate. Much photographed by passers by, this statue certainly makes quite a statement.

Address: 318 East 4th Street, Cincinnati, 45202, Ohio OH, USA
Tel: +1 513 621 1817
Christ Church Cathedral stands in the heart of the downtown district, just across from the Great American Tower at Queen City Square, and was founded in 1817. However, it was actually moved to its current location in 1835, where it has since been extensively remodeled. Home to a separate chapel, beautiful stained-glass windows, Gothic-style architecture and a friendly, welcoming atmosphere, the cathedral holds regular daily parish services.
Open hours: daily
Admission: free

Address: 325 West 8th Street, Cincinnati, 45202-1977, Ohio OH, USA
Tel: +1 513 421 5354
Serving the Roman Catholic Archdiocese of Cincinnati, St. Peter in Chains Cathedral was built in the 1840s and is an enormous building, with many impressive features and stone carvings. Once the tallest structure in the whole of Cincinnati for many years, this important Roman Catholic cathedral features classical Greek-style architecture and has been extensively restored and enlarged in recent years. The building itself is regarded as one of the finest examples of its kind in the whole of the USA and frequent masses are held here on a daily basis.
Open hours: daily
Admission: free

Address: 1140 Madison Avenue, Covington, Kentucky KY, 41011, USA
Tel: +1 859 431 2060
St. Mary's Cathedral Basilica of the Assumption is a truly breathtaking cathedral, resembling the famous Notre Dame in Paris, although on a somewhat smaller scale. Best known for its enormous stained-glass window, which is the largest of its kind in the whole world, other highlights at St. Mary's include over 80 other stained-glass windows, numerous stone gargoyles, large oil paintings and an impressive interior. The basilica was built in the late 19th century and was finally completed many years later, in 1910.
Open hours: daily - 10:00 to 16:00
Admission: free, donations suggested