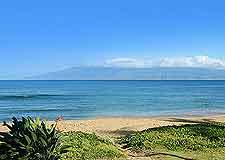 One of the principal islands in the Hawaiian archipelago, Molokai lies to the southeast of Oahu. It is perhaps best known for its long-term European resident and Belgian national, Father Damien de Veuster, canonized for his dedication to caring for lepers at his north shore colony during the late 19th century.

This saint finally caught and died of the disease after 16 years' worth of ministry, being considered a 'martyr of charity' and the spiritual patron of all outcasts.

The settlement history of Molokai began during the 6th century AD with arrivals from the far-off Pacific Ocean archipelago of the Marquesas, with subsequent migrations in the iconic double-hulled vessels from Tahiti and other South Pacific island groups. Although there are no records indicating why the islanders undertook the perilous 2,000-mile / 3,220-km journey to Hawaii, it's known that they introduced chickens, pigs and gods to the island, along with their agricultural staples of taro, coconuts, sugar cane and other reliable crops.


Prior to European discovery, the Hawaiian nation had no written language, with events, history and genealogy passed down through the generations in the form of chants. The most ancient settlement appears to have been based around the Halawa Valley, with its population enjoying sweet water from the hills, rich pickings from the sea and level, fertile, farming land. Fish ponds built by these early settlers can still be seen and are still used for aquaculture by villagers today.

During the pre-contact period, Molokai was a focus for the power and knowledge of its religious gurus, with its best-known prophet, Lanikaula, revered by pilgrims from across the archipelago. The island became a retreat, secluded from inter-island wars by both its religious status and its leaders' marital alliances, and was known as Molokai Ka Hula Piko, or 'Molokai, the Center of the Dance'. 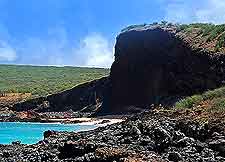 Captain James Cook's expedition sailed past Molokai in 1778, an event that was noted in the ship's log, and the earliest European landings occurred in 1786 with the arrival of George Dixon, a Royal Navy sea captain. Developments taking place on Maui and other islands in the Hawaiian archipelago due to European influence largely passed the island by until 1823. At this time a mission led by Protestant Reverend Harvey Hitchcock was set up on the eastern coastline, influencing the culture and ongoing history of Molokai to a considerable degree.

Leprosy arrived in Hawaii in 1848, reputedly from China, and had spread widely by 1866, at which time lepers were banished to the isolated Kalaupapa area of Molokai, where they subsisted with no care for seven years until the arrival of Father Damien. The good man built homes and a church for the sufferers, provided coffins, and organized regular medical supplies from Honolulu, paid for with donations. Fewer than 100 former patients of the colony still reside at Kalaupapa, now a National Historic Site, even though sulfone-based drugs, first made available in the 1940s, today prevent the contagion of the disease.

The population of Molokai remains small, at under 8,000 residents. Attempts to increase the tourist presence are strenuously resisted by islanders in favor of environmental stewardship and the rich traditions forming the island's mana, or spiritual energy.

In 2008, the largest employer closed its operations including hotels, restaurants, cinemas and a golf course, leaving the island with Hawaii's highest rate of unemployment and coincidentally continuing Molokai's isolationist history.