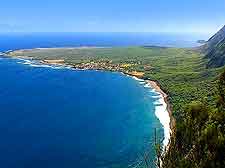 The island of Molokai is the place to come when you are looking for a relaxing holiday, a slower pace of life, and a taste of tropical Hawaii. Molokai tends to be situated just slightly away from the main Hawaiian tourist track and this really is an integral part of its charm.

The beaches here tend to remain quiet throughout the year, often being quite deserted, while the small resorts are equally appealing and welcoming, with a number of outstanding hiking trails never being too far away. On the rather isolated North Shore are some of the tallest sea cliffs on the planet, between Halawa and Kalaupapa, while the main town is Kaunakakai, which remains quite unchanged by the relatively recent tourism interest.

Kaunakakai would be the best place to find tourist information on Molokai, and the town's main businesses and hotels line the Ala Malama Street. The Halawa Valley is an especially beautiful part of Molokai and lies to the south, being reached along a scenic coastal road, flanked with glimpses of many beaches and some of the most rural parts of Hawaii. 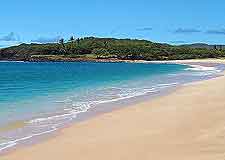 With such a lengthy and beautiful coastline, you won't have far to look on Molokai until you encounter some truly wonderful Hawaiian beaches, which are often just as you would image, lined with large palm trees, providing shade from the midday sun. Halawa Beach stands out as being especially popular and highly suitable for swimming, snorkelling and even at times, surfing. Tourists holidaying on Molokai often also choose to scuba dive around the island's acclaimed Barrier Reef, the only reef of its kind in the whole of Hawaii. If you would prefer walking to sunbathing and water sports, then considered spending time at the Kalaupapa National Park, where in the winter, you can often view distant humpback whales in the surrounding Pacific Ocean. More information about Molokai Tourist Attractions and Molokai Beaches. 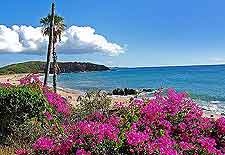 Within the expansive Kamakou Preserve, the Mount Kamakou dominates much of the island, being Molokai's tallest mountain and a good place to enjoy a day's hiking. Another very memorable landmark is Molokai Harbor, a lively area with a real buzz in the air and a wonderful place to indulge in some serious people watching. For something quite different, pay a visit to the remains of the Kamehameha V Summer Home, which was once a rather splendid summer retreat for Hawaiian royalty. Also with regal connections is the Kapuaiwa Coconut Grove, where just some of the 1,000 palm trees planted in the middle of the 19th century are still standing. More information about Molokai Landmarks and Monuments. 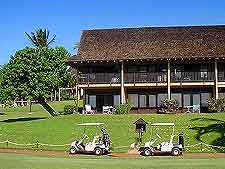 There are just a handful of different museums on Molokai, which provide insightful information about the island's culture, history and also the past industry of sugar production, which is showcased at the RW Meyer Sugar Mill in Kaunakakai. If you are visiting the mill, then do take time out to also enjoy the exhibits at the adjacent Molokai Museum and Cultural Centre. There are also a number of good galleries if you are looking to purchase some authentic Hawaiian art works for a holiday souvenir, both the Plantation Gallery in Maunaloa and the Kamakana Gallery in Kaunakakai are of note. More information about Molokai Museums and Molokai Art Galleries. 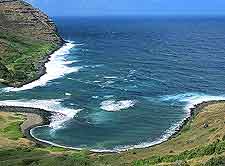 Molokai enjoys a very central setting within the Hawaiian archipelago, and so that means that many visiting tourists choose to spend some of their holiday time island hopping. Lanai, Maui and the Big Island of Hawaii all lie to the south, while Oahu is to the north-west and home to some iconic locations, namely the city of Honolulu and the breathtaking beach resort of Waikiki, where you can sunbathe and surf all day long. More information about Molokai Attractions Nearby.