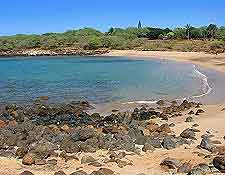 The coastline of Molokai stretches for more than 160 km / 100 miles, and whilst much of this is made up of steep cliffs and rocky outcrops, there are plenty of beautiful beaches and expanses of golden sand.

For the biggest selection of beaches, head to the western side of Molokai, although there are still some very appealing sandy spots scattered around the eastern shore, particularly around Halawa Bay, where the snorkelling is quite exceptional.

The beaches of Molokai are known for their natural beauty and seclusion, rarely being busy and often appearing almost deserted.

However, don't expect to ever see any lifeguards when you're swimming in the ocean.

For surfing, the best beaches include those at Kepuhi, Moomomi, Pohakuloa and Waialua.