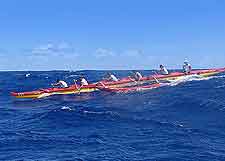 There is usually more than enough things to do on Molokai to fill any holiday. However, rather that looking for festivals, celebrations and local Hawaiian events, many holiday makers staying on Molokai are simply happy enough to soak up the sun and enjoy the scenery on one of the innumerable sandy beaches or coastal coves.

The autumn and winter months have become the time where tourists are most likely to holiday on Molokai, and coincidentally, this tends to be when the most noteworthy local events are staged. The include the legendary Aloha Festivals, which take place during the month of October and are held throughout Hawaii, featuring live music, dancing, cultural festivities and a range of family orientated events, which showcase Hawaii at its very best. 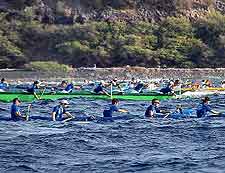 Also in October is the ever-popular Molokai Hoe Canal Race (Hinano Hoe Outrigger Canoe Championship), where intrepid Hawaiians cross the Kaiwi Channel in nothing more than a simple canoe, starting at the Hale O Lono Harbor and finishing at Waikiki's Duke Kahanamoku Beach, on the southern shore of Oahu, close to Honolulu. Molokai's canoe festival has been held for more than 50 years and now features over 100 different teams of canoeists. Soon after and in December, Molokai plays host to the Festival of Lights, with Ala Malama Street being very central to the celebrations and decorations.

January sees the arrival of the Ka Molokai Makahiki Festival, which is amongst the island's biggest sporting events and is often referred to as the 'Ancient Hawaiian Games'. Currently sponsored by the Tourism Authority of Hawaii, the Ka Molokai Makahiki Festival features various athletic events and competition, along with live music, Hawaiian dancing, various ceremonies, and a food market.

During the month of April, festivals to look out for include the Molokai Earth Day (Earth Day Celebration), where the island's natural resources are explores, and the Hoolaulea Festival, which is held at the Lanikeha Centre and includes concerts, games and more.

May is a busy month for Molokai festivals and they don't come much bigger than the Ka Hula Piko Festival, where you can enjoy traditional Hawaiian hula dancing, music and heaps of entertainment. The Ka Hula Piko Festival is held towards the end of May, during the third weekend. Also in May is the Kanaka Ikaika Kayak Race across the Kaiwi Channel. On a similar theme is July's Molokai to Oahu Paddleboard Race, which starts at Kaluakoi Beach and always draws a large crowd.