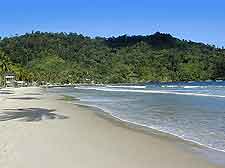 The sunshine, sea and beaches of Trinidad are almost legendary in the world of holidays, and feature everything that you could possibly want during your Caribbean adventure. Trinidad's beaches are certainly in plentiful supply and most are just a short drive or bus ride from the leading resorts, particularly Port of Spain.

Located on the north side of Trinidad, Maracas Bay is home to one of the island's premier beaches and is always very much favoured by holiday makers, who regularly pay a visit to the Maracas Lookout and its famed coconut sellers. Many of the beaches spread around the island are lined with tropical palm trees and rustic thatched huts, and really wouldn't look amiss on Hawaii.

North-West Peninsula
Often extremely close to Port of Spain, beaches on Trinidad's North-West peninsula always tend to be popular and well-developed, with a good choice of facilities, water sports and boat trips to neighbouring islands.

North Coast
The beaches on the North Coast of Trinidad are never far from the Maracas Valley and vary greatly in terms of popularity and the amenities available.

North-East Coast
The waters around the North-East Coast of Trinidad can be quite changeable, with the ocean swelling between November and April, when surfers come here in droves to make the very most of the seasonal breaks. Outside of this time, the waters are far calmer and more suitable for swimming. Many of the beaches and resorts here are a little rural in their appearance, and their appeal is simply their lack of development and natural charm

South-West Coast
Many wonderful beaches are to the found on the South-West Coast of Trinidad and provide a very inviting place to relax, being conveniently close to La Brea and also Pitch Lake. However, it is worth noting that the Orinoco River flowing into the sea here can make the water a little muddy at times.