Trinidad Weather, When to Go and Climate Information 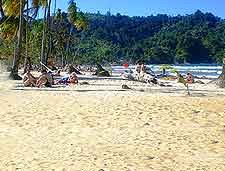 The island of Trinidad enjoys warm weather all through the entire year, with temperatures staying above 30°C / 86°F for virtually this entire period, often feeling hotter at times of high humidity. Trinidad's climate is best described as being tropical and the surrounding ocean waters never get the chance to cool down, and so year-round swimming is possible, along with many popular water sports.

There are really just two main seasons during a year in Trinidad, with the first half of the year being generally referred to as the dry season, when rainy weather is unlikely. The climate changes for the following six months, when the wet season arrives. However, rain is rather irregular and intermittent at this time, although when it does arrive, storms are heavy, and often relatively short-lived. 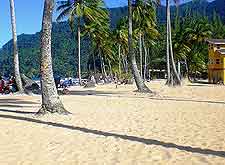 Both Trinidad and Tobago do not usually suffer from hurricanes, although winds can occasionally be strong, when trade winds arrive from the north-east. Weather forecasts will usually give plenty of warning in the rare instances.

Most holiday makers choose to arrive on Trinidad between January and May, when the climate is at its most inviting and the weather both dry and sunny. Other tourists choose to vacation here during the latter part of the year, when there are still plenty of fine days and fewer tourists.