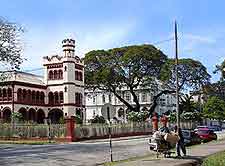 Food is an essential part of Trinibagonian culture and much of life on Trinidad revolves around its cuisine and restaurants. Those lucky enough to be dining out on Trinidad can expect eateries to offer a cuisine with noticeable influences from Africa, China, India, Latin America and parts of Europe.

The larger hotels in Trinidad and Tobago tend to feature their own restaurants and rather bland, tourist-inspired offerings. It is the local cooking that you should search out during a holiday and many dining establishments at the main resorts offer just that, ranging from a fragrant Indian curry to a Creole 'coocoo' (cornmeal polenta). Bottles of hot pepper sauce are usually found on most dining tables and nearly all locals seem to add this to everything, even pizza. 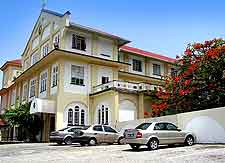 Although local restaurants on Trinidad certainly favour the chilli pepper, the Creole dishes are really not as spicy as you might expect. Fresh herbs, such as 'chadon beni' regularly make an appearance, along with caramelised chicken, coconut milk, vegetable rice, oxtail and curried goat. Creole soups are another culinary highlight and favourites include 'san coche', a lentil-based soup, which uses pig's tails for added flavouring. Fish broth and 'cowhell soup' (with split peas and tender meat) are also of note.

Seafood is always popular at dining establishments throughout Trinidad and tourists will find very generous steaks of dense fish, such as barracuda, cavalli, dolphin-fish, grouper, tuna and even shark. Creole-style seafood tends to be either stewed, fried or even curried. Marinated 'ceviche' salad with finely sliced raw fish is also worth looking out for. 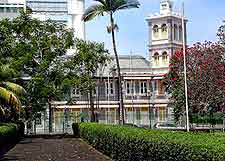 Some of the best restaurants around Trinidad actually occupy former private residences and usually retain much of their period character. Fine dining is especially plentiful around Port of Spain, the capital city, where restaurants are in good supply, often being close to the Queen's Park Savannah, the Brian Lara Promenade, the Cipriani Boulevard, Chacon Street, Frederick Street, Independence Square and the Woodbrook area.

Further eateries are to be found around the main resorts and beaches of Trinidad, such as Arima, Chaguanas, Las Cuevas Bay, Maracas Bay, San Fernando and Westmoorings.