Trinidad Events, Things to Do and Festivals 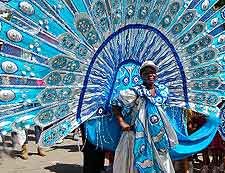 Through the year, the island features a very impressive calendar of Caribbean-style festivals, with many events and things to do tending to relate directly to Trinidad's beautiful coastline and set of beaches. At the end of each February, both Trinidad and Tobago play host to their famous carnival celebrations, with colourful carnival parades, calypso music and dancing around the streets of Port of Spain, and serving as a precursor to Easter.

The Steel Pan Festival or 'Panorama' is another leading event on Trinidad at this time of the year and takes place each February and March, with steel-band music competitions held throughout the islands, using this gentle national instrument. In particular, the Steel Pan festivities are concentrated within Port of Spain's very own Queen's Park Savannah 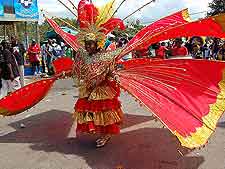 Come March, it is time for the Phawga (Holi). The springtime Hindu festival celebrates the arriving of the new season and has gained much popularity in recent years. Soon after, both Good Friday and Easter Monday are national holidays in Trinidad and Tobago, and known for the beachfront parties, when local families gather to enjoy something of a feast.

The Tuesday following Easter sees more of an unusual event on the neighbouring island of Tobago, when crowds come to watch the goat and crab races in Buccoo. Late March is also the time of a relatively new national public holiday, the Shouter Baptist Liberation Day, which is held annually on March 20th and marked with a number of religious rallies.

Trinidad's musical calendar comes to a real head each April and May, when the RapsoFest arrives, with its calypso rhythms and strong African influences. This leading music festival is held at venues across Port of Spain and is a chance to spot new talent.

In June, the biggest events held on Trinidad include the island festival of Hosay, the Roman Catholic Corpus Christi, Labour Day and St. Peter's Day, while late July and early August is when the very exciting Heritage Festival takes place on both Trinidad and also Tobago. At the end of August, it is time for the Santa Rosa Festival in Arima, which attracts crowds of literally thousands and remembers the native Caribbean Amerindians who once lived here. The lively street parties are a real highlight during the Santa Rosa.

Also in August is Emancipation Day / Columbus Discovery Day on August 1st), and Independence Day on August 31st, remembering the islands' newfound independence from Britain in 1962. Independence Day events on Trinidad begin at the Queen's Park Savannah in Port of Spain and include military bands, processions and an awards ceremony at the President's House.

September tends to be a quiet month on Trinidad, with the Royal Oak Derby horse race being a highlight for many, together with the Caribbean Latin Jazz Festival, which has grown to become something on an international event. Mid-October is when the Best Village Competition is held at Port of Spain, which also goes by the name of the National Folk Festival and attracts musicians, dancing troupes, playwrights and even chefs. The World Steel Band competition (Pan is Beautiful) is one event not to be miss in late October, as is the Trinidad Pan Jazz Festival in November and the Yuletide celebrations and Islamic Hosay each December, as well as the Creole music in the Parang Festival.