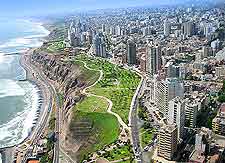 A wonderful and exciting South American city, Lima is Peru's capital and is actually the second-biggest desert city in existence. The landscape of Lima is diverse and ranges from rustic shantytowns, to modern shopping centres, gleaming high-rise hotels, exceptional seafood restaurants and an entertaining nightlife.

Lima has evolved into a fast-paced Peruvian metropolis and although this is very much a 21st-century city, you won't have far to travel to find flamboyant colonial buildings, pre-Inca pyramids, historical churches and other tourism offerings. For excitement, the bravest tourists may like to try their hand at paragliding from the Miraflores cliffs, or surfing next to the beachfronts of Costa Verde and Barranco.

Tourist information in Lima comes in the form of an iPeru outlet at the Jorge Chávez International Airport (Aeropuerto Internacional Jorge Chávez), as well as the official tourist office on the Pasaje de los Escribanos. There are also innumerable travel agencies dotted around the city centre (Lima Centro) and its Plaza de Armas (Plaza Mayor), offering excursions to archaeological remains, such as those of Pachacamac. 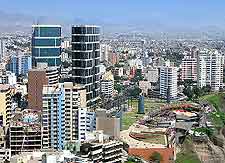 As the Peruvian capital, sightseers are likely to be completely overwhelmed by the sheer quantity and quality of attractions on offer within Lima. Many of the city's most attractive buildings surround prominent squares, which include the Plaza Bolivar, the Plaza Italia, the Plaza San Martin, and of course the Plaza de Armas in particular. When the sun is shining down, tourists and locals alike are often to be seen strolling along the City Walk, which is simply known locally in Lima as 'El Malecon' and features a beautifully crafted mosaic floor. For some incredible panoramas, the Alameda Chabuca Granda viewpoint is a truly magical spot, while those with children will be pleased to visit either the Parque Zoológico Centro Huachipam or the Parque de las Leyendas, both of which are zoos in their own right. More information about Lima Tourist Attractions. 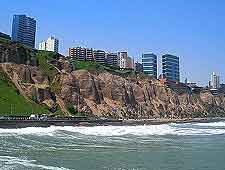 Apart from the colonial mansions of Lima, many additional landmarks stand out as you explore this vibrant city. The Basilica Cathedral (La Catedral) is amongst the most imposing and has origins as far back as the middle of the 16th century, although earthquake damage has been troublesome over subsequent years. One especially iconic sight in Lima is the Cerro San Cristobal - an enormous hilltop cross which overlooks the Rimac River and can be seen for literally miles and miles. For a little pre-Inca archaeology, be sure to check out the Huaca Huallamarca temple and the Huaca Pullana site. For something built more recently, the Municipal Palace (Palacio Municipal) is a splendid building and now serves as the city hall. More information about Lima Landmarks and Monuments. 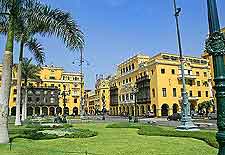 For the best museums in the whole of Peru, Lima is certainly the place to be and history buffs will be in their absolute element, soaking up the myriad of information provided. Although the past Andean civilisations are featured heavily in the city museums, at the National Museum of Anthropology, Archaeology and History of Peru in particular, other more unexpected topics include vintage cars, bullfighting and even torture. For a taster of Peruvian art, the Museo de Arte de Lima is one gallery not to miss and boasts a collection spanning approximately 400 years or thereabouts. More information about Lima Museums and Lima Art Galleries. 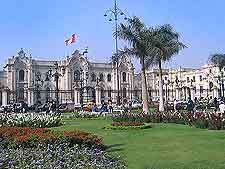 Lima enjoys a fairly central situation on Peru's westerly shoreline and as such, tends to be within reach of many additional attractions, although some are just too far to make day trips a possibility. Callao is the nearest and so close in fact that locals often refer to it as the port suburb of Lima, and is actually a city in its own right, being best visited for its beaches within the district of La Punta. If you have the time, do consider excursions to Ayacucho, Chaclacayo, Chosica, Huancayo, Pachacamac and Puruchuco, and further afield, to Cusco and its neighbouring local Inca city of Machu Picchu. More information about Lima Attractions Nearby. 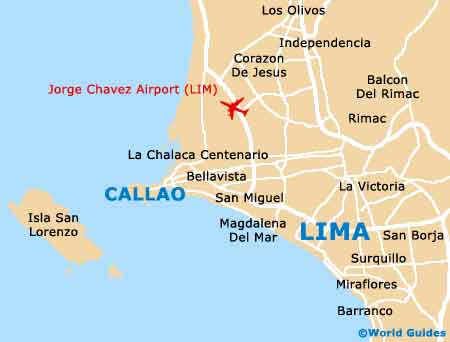