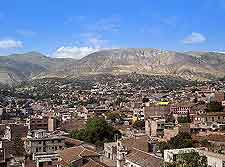 A welcoming Peruvian city surrounded by dramatic mountains, Huancayo offers an atmosphere almost akin to something out of the Wild West, successfully combining appealing modern and traditional elements. Huancayo serves as an important tourist destination for the Junin Region and the Rio Mantaro Valley, and boasts an abundance of culture, fiestas and fine dining.

Huancayo is situated within Peru's Central Highlands and is close to the Mantaro Valley. Large numbers of tourists now come to the city for its hiking trails through the Peruvian Andes, exciting mountain activities and jungle tours. The tourist information office on the Real, next to the Plaza de la Constitucion, provides details relating to sightseeing and tourism around the Mantaro Valley, and is located within the Casa del Artesano, directly above the indoor crafts market. 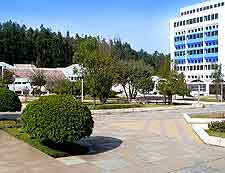 A relatively large city, the area's attractions are varied and sited both within the city of Huancayo and the nearby Mantaro Valley. Recreational activities abound in the Huancayo area and range from hiking and mountain biking in the Peruvian Andes, to lengthy treks to the Huaytapallana lake and glacier. Within the city itself are a number of public parks and important areas of green, with the Parque de la Identidad Huanca being found in the San Antonio neighbourhood. The stunning landscape of the outlying Quebrada Honda is worth a look, as is a trip on the famous El Tren Macho Train to Lima, which reaches extreme altitudes and ranks as the 'Highest Train in the World'. More information about Huancayo Tourist Attractions. 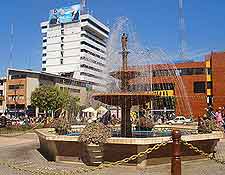 More and more tourists come to Huancayo each year to experience the naturally formed Torre Torre structure and these dramatic sandstone needles are the result of natural erosion over a period of many centuries. The Torre Torre needles can be reached in less than ten minutes and should feature at the top of any sightseeing itinerary. In the centre of Huancayo, man-made landmarks come in the form of some striking churches, such as both the Iglesia de La Merced on the Calle Real, and the Iglesia La Inmaculada Concepción on the Calle Mantaro. More information about Huancayo Landmarks and Monuments. 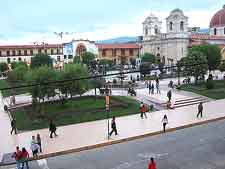 Although Huancayo may not be home to a huge selection of museums, there are a couple worth noting.

The Museo Salesiano on the Jiron Arequipa contains a fascinating collection of Peruvian archaeological artefacts from the Amazon region, while the Wali Wasi (House of Spirits) on the Avenida de los Angeles is known for its traditional art works, colourful masks and sculptures. More information about Huancayo Museums. 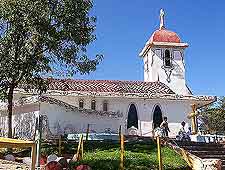 Huancayo is regularly frequented by tourists en route to other parts of Peru, being ideally situated for excursions to the Peruvian capital of Lima and its port suburb of Callao, which lie to the west. In the opposite direction and to the south-east, Huancayo is within reach of the spectacular Inca attractions of Cusco and Machu Picchu. The Andean city of Ayacucho is also relatively near to Huancayo and is overflowing with colonial architecture and historic churches. You may also like to take a trip to the Inca city of Huancavelica, the village of Izcuchaca, the friendly town of Jauja, the scenic Rio Mantaro Valley, and the unique Nazca lines, which are shrouded in mystery. More information about Huancayo Attractions Nearby. 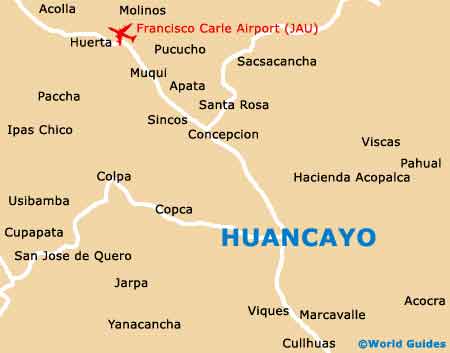