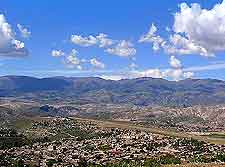 Ranking amongst the most inviting and appealing of Peru's cities, Ayacucho deserves to be experienced first hand and has managed to retain much of its historical colonial architecture and appearance. The skyline of Ayacucho comprises numerous tall church spires and the seasonal Semana Santa festivities really are the best that Peru has to offer tourists.

The tourism scene in Ayacucho remains surprisingly underdeveloped and the city is often overlooked in favour of surrounding Andean towns and tourist destinations. However, the allure of the recreational activities in the Andes mountains, the plentiful archaeological sites and its relative proximity to Cusco, Machu Picchu and even Lima, mean that it is a good place to spend a few days as part of a Peruvian tour.

Central to life in Ayacucho is the Plaza de Armas (Plaza Mayor de Huamanga), where the iPeru tourist information outlet is based, on the adjoining Portal Municipal, conveniently close to the San Cristobal Cultural Tourism Centre (Centro Turistico Cultural San Cristobal). Also on the square is the magnificent century mansion known as the Prefectura, which serves as an office for the Department of Ayacucho and dates from the middle of the 18th century. 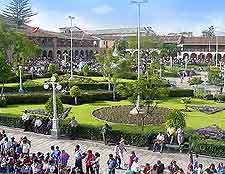 The colonial mansions of Ayacucho are one of the city's most notable of all the attractions, and the Casona Boza and Solis, the Palacio del Marques and the Salon de Actas are particular favourites for many a tourist. Ayacucho's numerous churches also warrant a mention and the most imposing include both the Iglesia de San Francisco de Asis and the Iglesia de La Merced. Visitors also enjoy a stroll around the quirky Santa Ana Quarter (Barrio Santa Ana), south-west of the Plaza de Armas, where a cornucopia of artisan studios await. More information about Ayacucho Tourist Attractions. 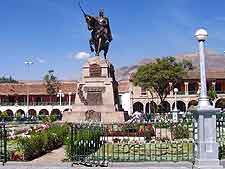 The pre-Inca archaeological landmark known as the Wari Archaeological Complex (Complejo Arqueologico Wari) is without doubt one of the most impressive sights to be seen in the Ayacucho area, and was historically a very important city during the period of the Wari (Huari) empire, some 1,200 years ago. Within central Ayacucho, the Plaza de Armas is where you will encounter the city's majestic cathedral, which exhibits a stylish Moorish facade and twin bell towers, and houses a collection of impressive historical religious art works and relics. More information about Ayacucho Landmarks and Monuments. 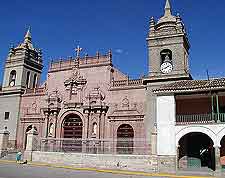 Those holidaying in Ayacucho would be strongly advised to visit at least one or two of the city's museums, where information about the Chimu, Chavin, Inca, and Moche civilisations is to be found, together with colonial paintings and ancient ceramics. The Hipolito Unanue Archaeological Museum on the Avenida Independencia is always worth a look and contains a fascinating collection of Peruvian mummies. Others will prefer Ayacucho's Joaquin López Antay art gallery and its progression of folk art and old photographs. More information about Ayacucho Museums and Ayacucho Art Galleries. 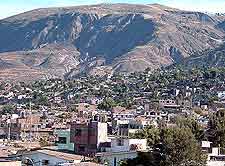 The Ayacucho Region contains a huge amount of interest and from the city, many day trips are available, particularly if an early start is possible. Other excursions warrant a little more time to explore, such as the capital city of Lima, and their distance and size means that they are not really suitable for just a brief visit. The world-famous Nazca lines are within reasonable reach of Ayacucho and best viewed by plane, while the Valley of Huanta and also La Quinua are both considerably nearer. Other nearby attractions include the archaeological site of Intiwatana, the small Quechua town of Huari, Lima's port suburb of Callao, and the Vilcashuaman ruins. More information about Ayacucho Attractions Nearby. 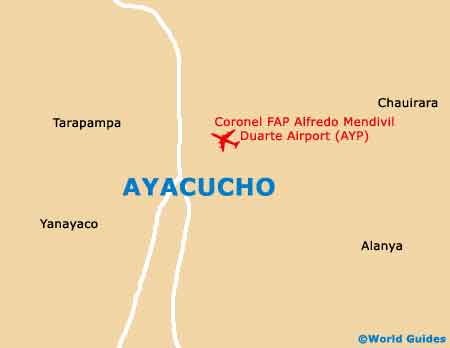