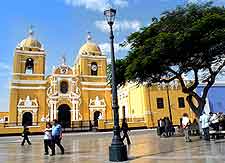 One of Peru's most charismatic cities, with colonial-style streets remaining similar in their appearance for literally centuries, Trujillo features an abundance of churches and ostentatious mansions. Founded around 500 years ago, Trujillo serves as a leading economic and tourism centre for the La Libertad Region and north Peru, and has always enjoyed much wealth and independence.

Trujillo is the third-biggest of all the cities in Peru, after both Lima and Arequipa, and enjoys a coastal situation and lies next to the Pacific Ocean, with the sandy beach of Huanchaco being especially close and popular with surfers. However, it is the famous ruins of the neighbouring Chimu capital known as Chan Chan that draws the most tourists. A number of tour companies and travel agencies offer trips to Chan Chan and other notable sights, and reside on the Plaza de Armas. 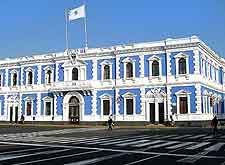 A good way to become familiar with the city of Trujillo is by taking a sightseeing tour, with various different tour companies vying for your business around the city centre. The colonial mansions of Trujillo are always impressive and in particular, the Casa Ganoza Chopitea is amongst the most impressive. For an insight into the Moche civilisation, the Brujo Archaeological Complex (El Brujo) in the La Libertad is one to pencil in, with its imposing stepped pyramid being one of the many highlights. More information about Trujillo Tourist Attractions. 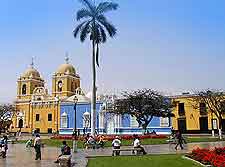 The rich history of the city is clearly apparent as you stroll around the winding streets, with the 17th-century Iglesia de la Merced church standing out for many a tourist. Trujillo is also home to no less than two important university complexes - the Universidad Privada del Norte and the Universidad Nacional de Trujillo, which add a certain youthful vibe to their respective neighbourhoods. The ancient Moche pyramids known as the Huaca de la Luna (Temple of the Moon) and the Huaca del Sol (Temple of the Sun) are further cultural treats and reside within the Valle de Moche area. More information about Trujillo Landmarks and Monuments. 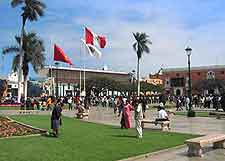 With such an interesting Peruvian past, Trujillo understandably wishes to share its heritage with visiting tourists and its profusion of museums are spilling over with information about local archaeology and Moche discoveries. Of note are the Trujillo Museum and its pre-Columbian artefacts, and the Casinelli Museum and its treasures relating to the Chimu, Huari, Inca, Recuay and Salinar civilisations. There are also a number of intriguing art galleries dotted around the city, housed within colonial mansions, such as the Casa Ganoza Chopitea on the Jiron Independencia. More information about Trujillo Museums and Trujillo Art Galleries. 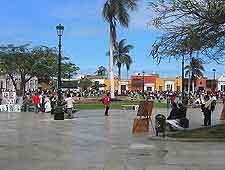 The La Libertad Region is an especially sunny part of Peru and all around Trujillo are cities, towns and villages, lending themselves to possible day trips. To the south, the city of Chimbote is very close and home to a bustling fishing port, often frequented by numerous colourful boats. Also relatively close to Trujillo and to the north, the Peruvian metropolis of Chiclayo is where you will discover the famous Royal Tombs of Sipan Museum and its Chimu and Moche remains. Excursions to Huanchaco, Otuzco, Pacasmayo and the beach resort of Tortugas are all also recommended. More information about Trujillo Attractions Nearby. 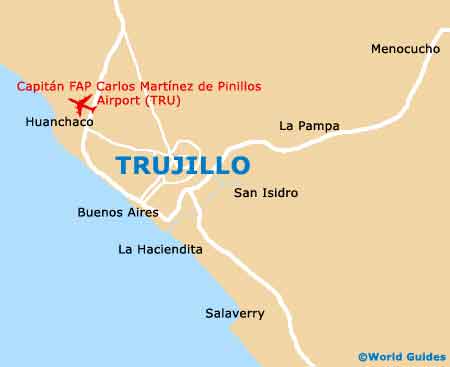