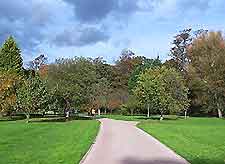 A city of Welsh history and industry, Cardiff also contains a sizeable number of important green spaces, with many parks and gardens being located either within or close to the city centre. Situated just up from Cardiff Arms Park and covering approximately 130 acres / 53 hectares, Bute Park encompasses a large expanse of mature parkland and is within walking distance of both Queens Arcade and the St. John the Baptist City Parish Church, being bounded on its easterly axis by the River Taff.

Lying to the north and on the other side of the river, the Pontcanna Fields come with superb sports facilities, with the National Sports Centre for Wales being located here, along with a camping site, an equestrian centre and some allotments.

Found on the far western side of Cardiff and reached via the Lansdowne Road (A4161), Victoria Park stands next to the Canton Rectory and was of course named after the famous monarch, Queen Victoria, being created in the late 1890s as part of her Diamond Jubilee celebrations.

Address: North Road, Cardiff, CF10 3EA, Wales, UK
Tel: +44 (0)29 2022 7281
Filled with local wildlife (including egrets, kingfishers and woodpeckers), Bute Park incorporates a popular water bus stop at Canton Bridge and is where you will find the iconic Cardiff Castle, which stands on its south-westerly side. An onsite arboretum contains some superb and unusual specimen trees, a number of which are the largest of their species to be found anywhere in the United Kingdom. The adjacent Sophia Gardens provides further interest and is home to the SWALEC Cricket Stadium.
Open hours: daily - dawn to dusk
Admission: free

Address: City Hall Road / Museum Avenue, Cardiff, CF10 3NP, Wales, UK
Cathays Park also goes by the name of the Civic Centre and enjoys a central setting, where it comprises a series of historic Edwardian buildings dating back to the early 1900s, such as the City Hall, the Temple of Peace, the Crown Court, and the National Museum and Gallery of Wales. Several formal gardens are based here, around the Welsh National War Memorial, the Gorsedd Stones and a statue of the third Marquess of Bute.
Open hours: daily - dawn to dusk
Admission: free

Address: Fields Park Road, Cardiff, CF11 9JP, Wales, UK
The centrally located Pontcanna Fields sit just behind the Sophia Gardens and the Glamorgan County Cricket Club, sitting alongside the River Taff. Formerly owned by the Marquis of Bute, the land was acquired by the City Council in 1947 and today there are a number of sports facilities present, including bowling greens (both indoor and outdoor).
Open hours: daily - dawn to dusk
Admission: free

Address: Thompson Avenue / Victoria Park Road, Cardiff, CF5 1EG, Wales, UK
Tel: +44 (0)29 2068 4000
Victoria Park covers just under 20 acres / 8 hectares and comes with a paddling pool (home to Billy the Seal from 1912 to 1939), a children's playground, tennis courts and a small football pitch, as well as a reconstructed Victorian bandstand. Springtime sees the grounds filled with daffodils and other flowers, while in the summer, many markets and live music events are staged here.
Open hours: daily - 07:30 to 20:00
Admission: free

Address: Romilly Road, Cardiff, CF5 1FP, Wales, UK
Thompson's Park is located on the western side of the city, where it is just down the road from the Chapter Arts Centre. This is an especially historic spot and was named after wealthy local corn merchant James Pyke Thompson (1846 to 1897), who contributed greatly to the local community. Visitors will find ornamental borders and planting, mature woodland, grassed areas, a well-tended bowling green, a pavilion and numerous pathways. Be sure to look out for the 'Green Man' carving and the fountain centrepiece.
Open hours: daily - 07:30 to 20:00
Admission: free

Address: Cherry Orchard Road, Lisvane, Cardiff, CF14 4EP, Wales, UK
Tel: +44 (0)29 2022 7281
Full of wildlife and woodland areas, the Parc Cefn Onn can be found in the affluent Lisvane neighbourhood, on the northerly outskirts of the city, and was established in the early 1900s, being later acquired by Cardiff City Council in 1944. With a number of woodland trails, seasonal displays of flowers, large open areas of grass, seating and picnic areas, the Parc Cefn Onn is based around the Nany Dawr stream and provides a particularly peaceful spot.
Open hours: daily - dawn to dusk
Admission: free

Address: Cosmeston Lakes and Country Park, Penarth, Vale of Glamorgan, CF64 5FA, Wales, UK
Tel: +44 (0)29 2070 1678
The very pleasant Cosmeston Park is located in the seaside town of Penarth, to the south of Cardiff, and features a number of lakes, landscaped gardens, a visitors' centre, a playground area for children and a restaurant. Other attractions include the nearby Cosmeston Medieval Village, woodland trails and seating areas.
Open hours: daily - 24 hours
Admission: free 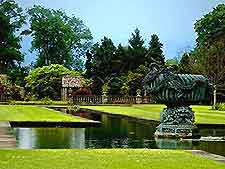 Address: St. Nicholas, Vale of Glamorgan, CF5 6SU, Wales, UK
Tel: +44 (0)29 2059 3328
Dyffryn Gardens, in the Vale of Glamorgan area, covers more than 50 acres / 20 hectares and can be found to the far south-west of Cardiff, close to Barry and the Wenvoe Castle Golf Club. With landscaped gardens, a large lake, ancient trees, a sizeable collection of plants from all over the world, a stately home and an outside theatre area, Dyffryn Gardens boasts a number of popular events throughout the year.
Open hours: daily - 10:00 to 18:00
Admission: daily, April to September - charge, discounts available for children, October to March - free

Address: Brynmenyn, Bridgend, CF32 8UU, Wales, UK
Tel: +44 (0)1656 725155
Situated in Bridgend, to the west of Cardiff, Bryngarw Country Park is an especially tranquil spot. With woodland trails, a playground for young children, large expanses of grassland, a restaurant and a visitors' centre, Bryngarw Country Park is home to a number of annual events staged throughout the year and is easy to reach by car or bus. Always popular here is the Meadow Meander, the Riverside Ramble and the Woodland Walk.
Open hours: daily - 09:00 to 18:00
Admission: free 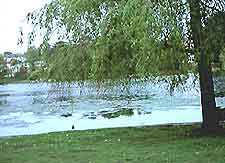 Address: Cardiff Bay, Cardiff, CF10, Wales, UK
Tel: +44 (0)29 2046 3833
The recently developed Waterfront and Britannia Parks are situated in Cardiff Bay and provide the perfect place for strolling. With impressive views of the stunning waterfront, landscaped areas, strategically positioned benches and a lively atmosphere, this is always a busy spot and provides a real oasis in the heart of city life.
Open hours: daily - 24 hours
Admission: free