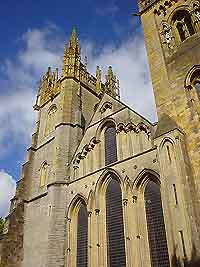 Those of a religious persuasion visiting Cardiff will find a number of grand churches and cathedrals to admire. St. John the Baptist is the oldest of all the city's churches and comes with an impressive bell tower and some grand openwork battlements.

Llandaff Cathedral is especially imposing and serves as the seat of the Bishop of Llandaff. The present-day building was completed in the 12th century, being built on the site of an older church.

Another religious landmark in Cardiff is the Metropolitan Cathedral Church of St. David, which is central to the city's Roman Catholic Archdiocese and was built between 1839 and 1842 at the cost of just over £2,000. Three choirs are associated with St. David's, with several concerts staged here each year, as well as travelling performances in some of the most important places of worship in Europe.

Address: Cathedral Road, Cardiff, CF5 2YF, Wales, UK
Tel: +44 (0)29 2056 4554
The spectacular and famous Llandaff Cathedral can be found in the picturesque Llandaff area and features many regular services and concerts, all through he year. Highlights at Llandaff include an imposing modern statue of Christ, Gothic arches, a truly spectacular interior and many original features.
Open hours: Monday, Tuesday, Thursday and Saturday - 07:30 to 18:00, Wednesday - 07:30 to 19:30, Sunday - 07:30 to 18:30 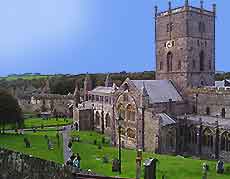 Address: Charles Street, Cardiff, CF10 2GE, Wales, UK
Tel: +44 (0)29 2023 0427
St. David's Cathedral is considered to be the city's second cathedral and is located in the centre. Dating back to the late-19th century, St. David's welcomes visitors and is full of interesting features. The structure was restored in the mid-20th century after damage during the Second World War and attractions include tall stone towers, an enormous pipe organ, stained-glass windows and regular services.
Open hours: Monday to Saturday - 10:00 to 18:00

Other churches in the Cardiff area include Bridgend Church, St. Cattwg, St. Mary's, St. Michael's and Runston Chapel, amongst others.