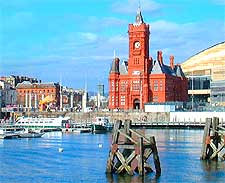 Cardiff has a long and fascinating history. The city's origins date back to the Romans, who built a fort here at some time around 55 AD. They chose their site wisely, because it's here that three rivers come together, namely the Taff, Ely and Rhymney.

Cardiff may also have the Romans to thank for its name. It's believed that the city was named after its first Roman governor, Aulus Didius Gallus. It was known as Caer Didus, which may have meant the 'Fort of Didius'. The Romans stayed here until around 350 AD, after which time it was abandoned as part of the general retreat of the Roman Empire from Britain. 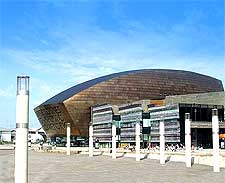 Local History in the Middle Ages

The Normans arrived in Wales shortly after the Battle of Hastings. They wasted little time in taking control of Cardiff. Work began on a castle here in 1091, probably on the ruins of the old Roman fort. Originally made from wood, the castle was rebuilt using stone during the 12th century. A walled medieval town grew up around the southern entrance to the castle.


In 1404, the invading Welsh army of Owain Glyndwr laid waste to both the castle and the surrounding town. It wasn't until 1423 that the Earl of Warwick began to rebuild Cardiff's defences. These included a new tower known today as Beauchamp's Tower.

By the 16th century, Cardiff was by no means a wealthy port. However, it was certainly a busy one. In 1573, it was allowed to collect customs duties. Eight years later, Queen Elizabeth I granted the town a royal charter. Two hundred years later, however, the situation was very different indeed. Fewer than 2,000 people lived in the town, which had fallen in the ranks to being the 25th-largest town in Wales. 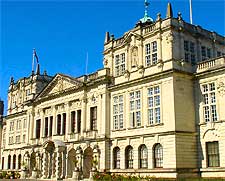 The building of the docks in Cardiff in the 1830s meant that the town could at last take advantage of the huge coal reserves found in the area. Coal became its main export, leading to something of a population explosion here. History shows that by 1881, Cardiff had finally regained its position as the largest town in Wales.

Towards the end of the 19th century, the town's powerful Bute family built the Glamorganshire canal. By linking Merthyr Tydfil with Cardiff, it helped to transform the town into one of the biggest coal-exporting ports in the world. The Bute family was also responsible for renovating and extending Cardiff Castle.

In 1905, Cardiff had grown to such an extent that King Edward VII granted it city status. A Roman Catholic Archdiocese was established here in 1916, followed by many national institutions, such as the National Museum of Wales, while immigrants came to work at the docks at this time.

It's thought that up to 45 different nationalities go to make up the city's multicultural community today. Some fifty years later, Cardiff beat competition from Caernarvon to be named as the capital city of Wales.

Recent developments in the city include the building of the Millennium Stadium, which hosts the annual National Eisteddfod of Wales and many major sporting events. The waterside area has also been transformed. From 2005, Cardiff also became synonymous with the Doctor Who sci-fi TV programme that is filmed on the city's streets.