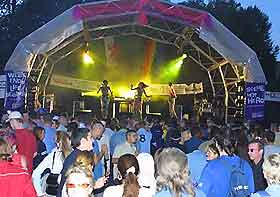 The modern Welsh capital enjoys a healthy gay and LGBT scene, with some of its most popular bars and nightclubs being found around the city centre.

Open every night and located on Charles Street, Club X caters to the hardcore clubber and suits all persuasions, with its biggest nights lasting well into the early hours of the morning and suiting even the most hardcore of partygoers in Cardiff. Opened in 2005, Bar Icon also stands on Charles Street and is a popular gay spot known for its upstairs dance floor and basement bar, complete with trendy decor and an exciting atmosphere.

Located on Hayes Bridge Road, in the Bute Terrace area, the Golden Cross Inn is a long-established gay pub and is a great place for a cheap, quiet drink and entertainment, with themed nights ranging from live music and karaoke, to drag shows and dancing. Just down the road on Mill Lane, the King's Cross was once one of the most established gay pubs in Cardiff, although following its closure in 2010, it has since been reopened as a gastro-pub named the Corner House.


For a very memorable and fun night out, pay a visit to Minsky's on St. David's Way. Easy to find, Minsky's enjoys a relatively central setting in Cardiff, being just a short walk away from the Queen Street Train station, and sandwiched in the middle of St. David's Center and the Metropolitan Cathedral of St. David. Friday and Saturday nights here consist of comedy drag shows, where audience participation is most certainly encouraged.

A matter of minutes away and standing on Churchill Way is Pulse, which is situated just across from the Capitol Shopping Center. In the past, Pulse has gained the title of the 'Best Nightclub in Wales' and boasts regular live entertainment, cheap booze and many party nights, such as the blue-themed Smurf Party, where free cocktails are often available for those who have dressed up as suggested.

Almost directly opposite Pulse is the Wow Bar, which also resides on Churchill Way and opens daily at 09:00, staying open until as late as 03:00 Monday to Saturday, and until 02:00 on Sundays.

Address: Bute Park, Cardiff, Wales, UK
Tel: +44 (0)29 2087 1260
The city's annual Lesbian and Gay Mardi Gras festival is usually held at either the end of August or the beginning of September. It is often headlined by a pop star or celebrity and features a large music stage, gay blessings, a cabaret tent and a ball in the City Hall.

Currently one of the UK's biggest free gay events, drawing in the region of 40,000 attendees, Mardi Gras takes place in Bute Park and Cooper's Field, which is situated close to the train station and at the rear of Cardiff Castle. In 2013, the pride festival took place at the Millennium Stadium, home of Welsh rugby. However, the event was met with mixed reviews, due to a noticeable lack of atmosphere, high food prices and admittance problems.

First held in 2007, the Iris Prize is open to filmmakers throughout the world, who produce a short film with a gay or lesbian theme. The festival lasts in the region of four days and consists of numerous screenings of the competing films, culminating in a grand awards ceremony on the closing night.