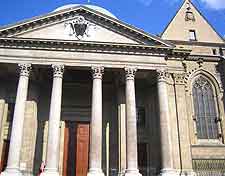 Amongst the many popular historic monuments and man-made landmarks in Geneva are no less than ten ancient castles, with a further 80 located close by and within the nearby canton of Vaud. However, it is the natural landmark of Lake Geneva (Lac Léman), which has shaped the city of today, bringing it great wealth and prosperity over the years, and always attracting tourists.

The second-biggest of all the freshwater lakes located within Central Europe, visitors to Lake Geneva will be able to enjoy sailing, boat trips, wind surfing, diving and even water skiing, weather permitting. Bring your camera to photograph the iconic Jet d'Eau fountain. However, visitors should be warned - if the direction of the wind changes quickly you will run the risk of becoming soaked. 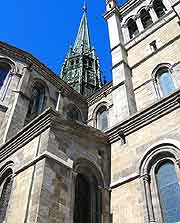 Address: 6 Cours St. Pierre, Geneva, CH-204, Switzerland, CH
Tel: +41 022 311 7575
The Cathédrale St. Pierre has its origins in the 11th century, although the architecture has been remodelled several times and can generally be considered to be Gothic in style, with some remaining Romanesque features. Standing on an important archaeological site with known Roman mosaics from the 4th century, St. Pierre Cathedral is worth entering, since this is the best way to fully appreciate the vibrant colours of the stained-glass windows. Those feeling energetic can climb the steps, which number more than 150, and reach the top of the north tower. Well worth the effort, visitors will then be treated to exquisite views across the Geneva cityscape itself.
Open hours: Tuesday to Sunday - 10:00 to 17:00
Admission: free, donations suggested when visiting 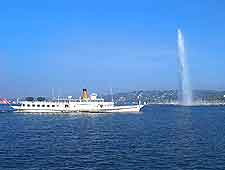 Address: Rade du Geneve, Switzerland, CH
An important landmark and the source of considerable wealth over the years, the city's harbour provides access to Lake Geneva itself, an enormous expanse of water and much-used recreational space. The powerful fountain known as the Jet d'Eau dominates much of the lake and shoots around 500 litres of water almost 150 metres / 492 feet into the air.
Open hours: daily - 24 hours
Admission: free 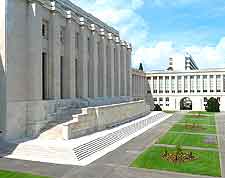 Address: 14 Parc de l'Ariana, Avenue de La Paix, Geneva, CH-1201, Switzerland, CH
Tel: +41 022 907 4560
Formerly the headquarters of the League of Nations and now used extensively by the United Nations (UN), the Palais des Nations is situated within Ariana Park and is home to some 3,000 civil servants. The palace enjoys excellent views across the park and Lake Geneva itself, and was actually gifted to the city by a wealthy family, on the strict condition that the grounds should always contain freely roaming peacocks. Guided tours of the Palais des Nations interior are quite interesting, lasting around one hour and allowing access to the gardens, where an eye-catching titanium monument recognises the USSR's contribution to space exploration.
Open hours: daily, July to August - 09:00 to 18:00; September to June -10:00 to 12:00 and 14:00 to 16:00
Admission: charge 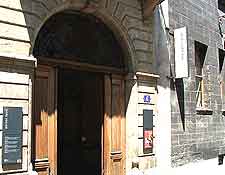 Address: Rue du Puits St. Pierre 6, Geneva, CH-1204, Switzerland, CH
Tel: +41 022 418 3700
The most historic house in the whole of Geneva, the Maison Tavel is just a short walk from the cathedral and was built during the 14th century. Within the house itself is an extensive museum, which documents how life in Geneva has changed over the centuries, whilst this house stood here, remaining virtually the same throughout this time. The loft contains an enormous map of Geneva, which was created in 1850 and covers around 35 square metres / 377 square feet.
Open hours: Tuesday to Sunday - 10:00 to 17:00
Admission: free