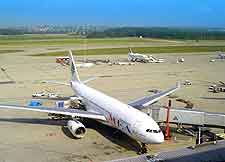 Geneva International Airport, which is located just outside the heart of Geneva, ranks as one of Switzerland's largest. The facility was first opened in the year of 1920, but it didn't become a major passenger gateway until after WWII. Altogether, more than 13 million passengers are currently handled here each year.

There are two terminals at the airport, although a new terminal project is currently underway. Terminal 1, the main building, services most of the international flights into Geneva. Schengen and non-Schengen destinations are separated into different piers at Terminal 1. Terminal 2, the original building, primarily serves charter flights during the winter months.

EasyJet Switzerland and Swiss International Airlines are two of the largest carriers that use the airport as their base. However, there are dozens of other international and low-cost airlines serving the airport. There is only one runway at the facility, but it is one of Switzerland's longest at some 3,900 metres / 12,800 feet.

Address: 29 Route de Pre-Bois, Cointrin, CH-1215, Geneva 15, Switzerland
Tel: +41 22 717 7111
Geneva International Airport is situated just 5 km / 3 miles from the city centre. It is located in the district of Cointrin, on the E25 expressway. Interestingly, the north-western fence line of the site is located on the border between Switzerland and France.

The Rue de la Servette is the main road connecting the city centre and the terminals. Drivers should turn right onto the Route de Pre-Bois, which leads to the Route de l'Aeroport. This road will take passengers directly to the terminals of Geneva International Airport.

Some hotels offer shuttle bus services free of charge. However, it is easy to reach the airport by using the Unireso public transportation network. Bus numbers 5, 14 and 23 are just some of the routes offering connections to the terminals. Of note, it takes in the region of 15 minutes for public buses to reach the airport from downtown Geneva.

There is a train station located onsite which conveniently links to the downtown district of the city. Trains take less than 15 minutes to reach the Geneva Central Station.

Taxis are available from outside the Arrivals halls of the terminals. Fares to the city centre are relatively cheap, but depend upon the time of day and traffic conditions. In the city centre, there are more than 60 taxi ranks, and hotels can efficiently arrange taxis to the airport.