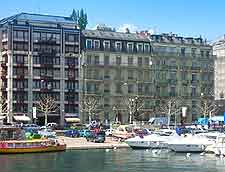 Geneva contains an excellent range of accommodation, with many hotels and hostels happily suiting the majority of budgets. Around the city of Geneva you will also find a number of inexpensive lodging options offering dormitory style rooms, with even some university institutions providing cheap rooms in the summer holidays. The relatively new, centrally located City Hostel Geneva offers some of the cheapest accommodation packages and is situated on the Rue Ferrier, opposite the Post Office.

In total, there are well over 100 different hotels distributed around Geneva, many of which are close to the city centre itself and often occupied by business travellers. Accommodation is almost always scarce in Geneva, with both a busy summer and winter season, when the heavy snowfalls on the nearby Alps mountains offer superb skiing. 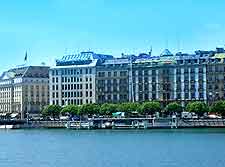 A large proportion of the hotels in Geneva provide either four-star or five-star accommodation, many of which are fairly bland and lack any real Swiss character.

Standing out from the crowd, the Hotel Beau Rivage on the Quai du Mont Blanc was built is the 19th century and enjoys breathtaking views across Lake Geneva, as does the highly atmospheric Hotel Les Armures, which lies along the Rue du Puits St. Pierre, in the very heart of the Old Town district. 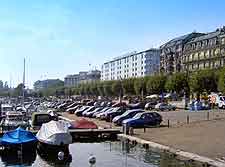 Nearby and considerably cheaper, the Hotel Bel'Esperance is also to be found within Old Town Geneva and on the Rue de la Vallée.

If you are looking to stay close to the railway station (Gare de Cornavin), then the Hotel International and Terminus is probably the one for you.

Standing on the Rue des Alpes, next to the Place de Cornavin, the accommodation here is graded as three-star and is of a particularly good standard.