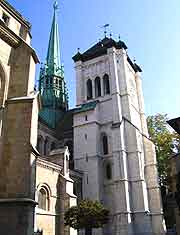 A fortified border town of sorts was already based here when a troop of Romans arrived in the early 2nd century BC. They further defended the settlement against attacks from the Helvetii Celts, and in 52 BC, a small bridge spanning the River Rhône was destroyed by the Romans to help isolate and protect the town, under the orders of none-other than Julius Caesar.

Early Geneva was therefore very much assisted by the Romans, who brought with them organisation and modern building techniques. The town soon grew, becoming an important Episcopal seat during the 4th century AD and a part of the Kingdom of Burgundy in the 9th century.

The Founding of the Swiss Confederation

Geneva continued its growth and it soon became the target for various conquests, due to its enviable setting and strategic riverside location. It was not long before the Dukes of Savoy showed an interest and began to exercise their jurisdiction over the town, although the arrival of the Swiss Confederation in 1530 ended this rule.


Evolution of the City

Now a strong Protestant state, the 16th century was also the time when Geneva became known as something of a welfare state. A hospital was built in the 1530s, while the year of 1559 saw the building of the University of Geneva (Université de Genève), which now features a student base close to 15,000 and resides on the Rue du Général-Dufour.

In 1602, undeterred by the power of the Swiss Confederation, Charles Emmanuel I (Duke of Savoy between 1580 and 1630) set his sights on regaining control of Geneva. However, his attack failed when his guard was spotted attempting to climb the walls by a local housewife, who proceeded to pour some boiling soup over his head. This story is now fondly remembered in local history at the city's yearly Course de l'Escalade festival, staged each December. 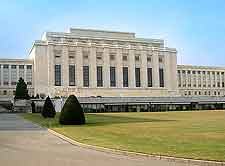 The French Revolution and Industrial Times

At the start of the French Revolution in 1789, troops arrived in Geneva and occupied the city, making it the French Léman Department's capital. As a result, Geneva lost its independence, although the French occupation was relatively brief, ending in the summer of 1814 when they were forcibly evicted from Switzerland.

A few decades later, the Industrial Revolution was affecting the city and textiles factories rapidly appeared, along with watchmakers, banks and general commerce. In 1896, the city successfully hosted a National Exposition, when almost 2.5 million visitors came to Geneva to see its Parc de Plaisance and mountain replica named the 'Village Suisse'. However, while visitor numbers were exceptional, the expo did make a substantial loss in the region of 750,000 Swiss Francs.

The Service Industry and Tourism

During the 20th century, Geneva decided to concentrate its efforts on the services industry. The headquarters of the League of Nations (LON) relocated here in 1920 and its first General Assembly meeting was held later that year. In 1946, the European Headquarters of the United Nations also made this city its home. The recession of the 1990s had a knock-on effect when it came to Geneva's tourism and financial sectors, with a slow recovery following over the next decade.

History abounds within the Old Town (Vieille Ville), where many of the city's oldest and most impressive buildings await sightseers, such as the imposing St. Peter's Cathedral (La Cathédrale St. Pierre). Close by is the City Hall, Bastions Park and the Reformation Wall memorial, all within easy walking distance of each other.