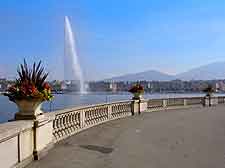 The city of Geneva is split into a total of eight districts (quartiers) and many further neighbourhoods and smaller areas. Both the River Rhône and Lake Geneva itself form natural boundaries for these districts, providing scenic views and endless recreational activities.

Filled with charming old buildings and historical landmarks, Old Town Geneva (Vieille Ville) is popular with everyone, regardless of age. One of the city's most appealing neighbourhoods, the Vieille Ville is a mixture of bistro-style restaurants and cafes, speciality shops selling Swiss handicrafts and antiques, and seasonal festivals. 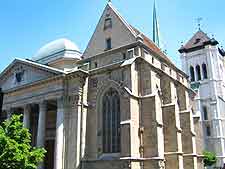 There is always something to do in the Old Town, such as taking in a performance at the Geneva Opera House (Bâtiment des Forces Motrices) at the Place des Volontaires, next to the River Rhône, or climbing up the steep North Tower of St. Peter's Cathedral (La Cathédrale St. Pierre), where the views are more than worth the effort. Also not to be missed is the Maison Tavel on the Rue Puits-de-St-Pierre, which is the oldest private house in the whole of Geneva and dates back to the mid-14th century, and the Bourg-de-Four, a large and elegant public square filled with cafes with terrace seating. 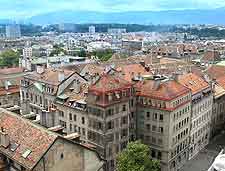 Geneva city centre is where much of the action takes place. Your first port of call should be to the Genève Tourisme office on the Rue du Mont-Blanc, within the main post office. Also in Geneva city centre are a number of giant outdoor chessboards along the Promenade des Bastions and even white-water rafting, along the rapids on the River Arve, next to the Quai des Vernets. The small islet known as Ile Rousseau stands next to Geneva city centre and is considered to be one of the centre neighbourhoods. This district is a great spot if you crave peace, quiet and waterfront views, and if you simply fancy a bite to eat, then a good restaurant in on hand and housed within a historic pavilion building.

Boasting spectacular vistas across Lake Geneva and famed for its exclusive neighbourhoods, where the rich and famous choose to live, the easterly district of Cologny is perhaps most famous for its Villa Diodati, where Mary Shelley once dreamt up her story of Frankenstein. Others will be interested in the water skiing course, which is available close by at the Wake Sports Centre. 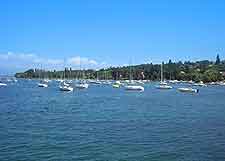 Lake Geneva dominates the city and this beautiful expanse of water is responsible for much of the city's tourist appeal. A range of recreational activities is available on the lake itself, around the shoreline and beach areas. Regular boat trips travel to Switzerland's nearby city of Lausanne, or the town of Évian-les-Bains in France, where Evian mineral water actually originates. Hard to miss is the Jet d'Eau fountain, which shoots 500 litres of water each second to around 140 metres / 460 feet in height.

Home to 'La Roseraie', the city's much-loved Rose Garden, the district of Les Eaux-Vives enjoys a picturesque lakeside setting and many inviting green spaces. Head to the Rue des Eaux-Vives if fashion shopping is on your mind, or down the Rue des Barques and to the Quai de Cologny if you are feeling brave and fancy learning how to windsurf, where lessons are available at the Tropical Corner from May to September.

Known for its bohemian atmosphere and diverse range of ethnic eateries, Les Pâquis is an alluring part of Geneva. One of the city's most elegant districts, Les Pâquis lies on the northern side of the city centre and is close to the Gare de Cornavin and also Lake Geneva itself. Many of the city's best hotels reside here, such as the Hilton and the Beau-Rivage, while other highlights include the Grand Casino and also Wilson Place.

Much of the appeal within the districts of Carouge and Rive Gauche comes from the thoroughfare of the Rue du Rhône, where many designer outlets, department stores and upmarket jewellers offer a good place for some serious window shopping. This leading shopping neighbourhood is just a short distance to the south of the Vieille Ville and is well supported by Geneva's extensive public tram network.