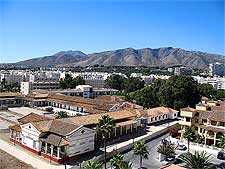 Once a poor and rather obscure fishing village, Torremolinos has transformed into one of the most popular resorts on Spain's Costa del Sol. From the earliest days of its history, Torremolinos was never developed into a proper city like Malaga just to the east.

It wasn't until as recently as the middle of the 20th century that anyone paid much attention to this town. However, today it is a hot spot for Brits on holiday and a major player in the Spanish gay beach scene.

Not much is known of the ancient roots of Torremolinos. The mountain behind the town is riddled with limestone caves, many of which, like the Tapada Cave, contain evidence of settlement from the Bronze Age onwards. The Greek cartographer Claudius Ptolemy is remembered for discovering a Phoenician colony in the area known as Saduce, but it was most likely the Romans who founded the actual town as it is known today. 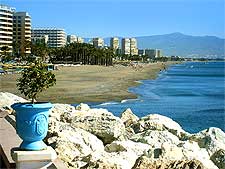 Tower of the Mills

When the Moorish conquest of Spain began in the 8th century AD, the history of Torremolinos was still rather blurry. The Arabs were the ones who built the mills in the area that gave Torremolinos (Tower of the Mills) its name. Just one of these mills remains standing, the Molino de Inca, which is now called home by a popular local eatery.

Better known to historians is the defensive tower aptly named the Torre de los Molinos, commissioned at the turn of the 14th century by the Arabic Nasrid rulers in Granada. Standing some 12 metres / 39 feet high, it is constructed of old adobe bricks with two floors and several small windows facing out towards the sea. Though the inside is in ruins, visitors often still come to see this tower, finding it at the southern edge of Torremolinos. 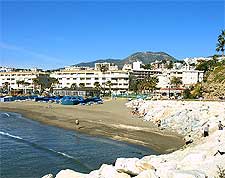 A Period of Decline

After Granada fell to the Christians at the end of the 1400s, Torremolinos was very much left to its own devices. The population slumped as pirate attacks were common right through the 18th century. At the time of the War of Spanish Succession (1701 to 1714), an Anglo-Dutch fleet led by powerful British naval commander Sir George Rooke virtually levelled the entire town during an attack. Of interest, by the year of 1770, the total population of the town was barely above 100.

As the mill industry faded away at the end of the 1920s, a new form of economy emerged in Torremolinos history. British visitors were among the first foreigners to make their way to the town for the explicit purpose of holidaymaking. This trend, which began in the late 1920s, continues today as thousands of British expats live here and many more come to visit.

Torremolinos was the first town along Spain's Costa del Sol to be targeted for major tourism development. The Hotel Pez Espada began trading in 1960, followed soon after by dozens more accommodation options and Spain's first-ever gay bar, named Toni's Bar, which opened its doors in 1962. This sexual tolerance has persisted, and today Torremolinos is a well-known and extremely popular gay tourist destination.