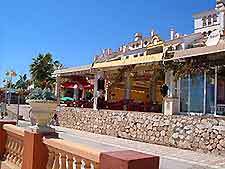 Torremolinos is amongst the most famous resorts along Spain's spectacular Costa del Sol and the local tourist industry began to thrive during the 1960s, when this impressive coastal spot quickly gained popularity. These days Torremolinos is known for its spotless sandy beaches, clear waters, array of restaurants and hotels, and lively nightlife - especially during the summer months.

Life on the Costa del Sol is led at a fairly leisurely pace and with the town's close proximity to nearby Malaga, Torremolinos has much to offer both the visitor and holidaymaker. Out of season, this busy summer resort takes on a whole different feel and charm, with life being led at a much more relaxed pace.

A major tourist resort located in the heart of the Costa del Sol, visitors are well catered for in Torremolinos, with the main tourist information bureau being located on the central Plaza Pablo Picasso, where you will find a selection of travel guides and leaflets, maps of the area, accommodation advice and festivals listings. There are also a number of tourist information booths and kiosks situated throughout the Torremolinos area, dispensing useful brochures. 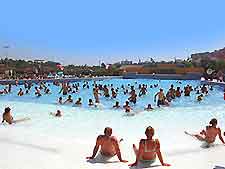 Spanish is the third-most widely spoken language in the world, following Chinese and English. Although Spanish is the main language in Torremolinos, English, French and German are generally spoken and understood at most tourist sights, hotels and restaurants that cater for visitors, with many restaurants providing menus in a selection of languages. In smaller towns and villages outside of the Torremolinos area, a phrase book may be necessary to assist with translation.

Tipping is quite discretionary in Torremolinos and throughout the Costa del Sol, with taxi drivers usually being given a small tip of a few Euros, although this is by no means compulsory and you should never feel pressured into tipping. Restaurants always include service charges by law and these should be clearly displayed on all of the menus, although a tip will still be expected and very much appreciated. Hotel staff, such as luggage handlers, happily accept a small tip for carrying your bags. Generally, no other public service workers in Torremolinos expect to be tipped. 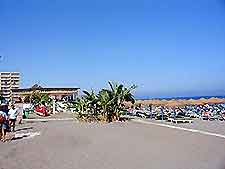 The national religion of Torremolinos and throughout Spain is Roman Catholic, although many other faiths and major religions are also represented here, including Protestants and Muslims. There are plenty of churches present in the area holding regular services, where visitors are always welcomed, regardless of religion.

As from 2006 in Spain, smoking is restricted in buildings and on public transport, with prominent no-smoking signs in place. Spanish legislation now makes it illegal to smoke in many public places, where food is served, and in places catering for children. Restaurants in Torremolinos must have smoke-free areas, with the rights of non-smokers tending to prevail over the right to smoke. However, most pubs and bars in Torremolinos welcome customers, who can either smoke in designated areas or outside. 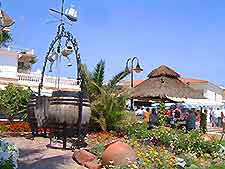 The Euro is made up of eight coins and seven paper notes and was introduced on January 1st, 2002. The 12 original members of the European Union - Austria, Belgium, Finland, France, Germany, Greece, Ireland, Italy, Luxembourg, Netherlands, Portugal, and Spain - planned the event for many years in advance, deciding upon a specific conversion rate for each country's national currency. The colourful Euro bills, which include holograms and shades of green, yellow, blue, mauve and orange, are identical throughout Europe. Coins have one common and one national side, but they can be used in any of the member countries, regardless of the country of issue. Old currencies are no longer accepted as legal tender, although major banks will happily convert them into Euros.

Torremolinos, as with all busy holiday destinations, is a pickpocket's paradise, particularly in large crowds. Always be careful with hand baggage, wearing handbags and cameras across your body when walking around in Torremolinos. Also, consider using discreet money belts, park cars in well-lit parking areas or hotel car parks, and never leave valuables on display in parked cars and hotel rooms.

VAT (IVA) is always included in the price and refunds are unusual in Torremolinos and throughout Spain. Tourists visiting from countries outside of the EU may claim a refund on the tax if the item was bought for personal use and cost more than a certain amount. For further information regarding taxes, ask the shopkeeper.