Getting Around, Torremolinos Travel, Transport and Car Rental

Torremolinos is one of the most famous holiday destinations on the Costa del Sol and offers a solid and reliable transport infrastructure, with many convenient ways to travel around the area. Most visitors to Torremolinos travel by air, arriving at the nearby Malaga Airport (AGP), just a short distance from Torremolinos. The resort is also home to a small airport, known as 'Torremolinos Airport (UTL)', which offers a selection of mainly private charters.

For those looking for the convenience and independence of travelling around by car, many rental transport companies can be found at the airport, where mopeds can also be hired. If you are planning to travel around Torremolinos on a budget, then buses are the best type of transport, with many inexpensive buses travelling throughout Torremolinos and the surrounding area at regular intervals. Trains also connect Torremolinos with neighbouring resorts and provide one of the fastest ways to travel into both Fuengirola and Malaga.

Address: Avenida Garcia Morato / Avenida de Velazquez (MA-21), Malaga, 29004, Spain
Tel: +34 952 204 84 84
The main gateway to the Costa del Sol is via Malaga Airport (AGP), which is situated around 8 km / 5 miles to the southwest of central Malaga, and just 6 km / 4 miles to the north of Torremolinos. Malaga Airport offers a range of ground transport options, and Torremolinos can be reached in just 20 minutes by train. Bus travel, hotel shuttle transport, car hire and taxis are also readily available at the airport. 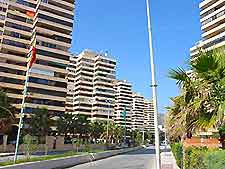 Car rental is readily available at Malaga Airport (AGP) and provides a particularly convenient way to travel into nearby Torremolinos, which can be reached in around 10 to 15 minutes minutes, depending on traffic levels. Torremolinos is connected to the airport by major roads and highways, including the Avenida Del Comandante Garcia Morato, MA-21, MA-20 and the Calle Costa Rica. The main car hire transport companies available at the airport include Avis Auto Rental, Budget Rent-a-Car, National Rent-a-Car, Europcar and Hertz. A number of car rentals firms are also located at the nearby Torremolinos Airport (UTL). Mopeds can be hired in and around Torremolinos and are reasonably priced, being available on a daily or weekly basis.

Tel: +34 952 382 419
The Torremolinos bus station can be found along the Calle Hoyo, to the northwest of the Plaza Costa del Sol and east of the town centre. Regular buses travel from Torremolinos to many nearby cities, towns, villages and resorts, including Malaga, Benalmadena, Mijas, Fuengirola, Ronda and Marbella. Buses stop on the Avenida Palma de Mallorca, which is located close to the bus station. The nearby Malaga bus station also offers a number of buses and coaches which travel to several major cities nearby, including Seville and Granada. Bus transport is one of the most inexpensive and affordable ways to travel around the Torremolinos area.

Tel: +34 952 360 202
The Torremolinos train station is situated on the Avenida Jesús Santos Rein, which stands just off the Calle San Miguel, along the Paseo de la Nogalera. Regular trains travel to and from Malaga, with the journey lasting around 30 minutes, stopping off at Fuengirola along the way. Many other coastal towns are connected to Torremolinos by train, with reasonable fares. Tickets can be purchased at the train's ticket office, where singles and returns are available.

A selection of taxi companies operate in the Torremolinos area and are a useful way to travel around town, and from nearby Malaga Airport. The resort's main taxis include Radio Taxi, Unitaxi and Torremolinos Taxis.