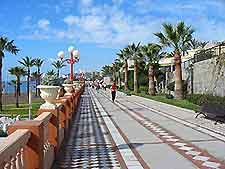 Despite Torremolinos being a major coastal resort known for its modern high-rise hotels and sandy beaches, if you look a little further you will find that Torremolinos does actually offer a number of historical landmarks, monuments and old buildings.

One of the most famous remaining landmarks in the Torremolinos area is the Pimentel Tower (Torre de Pimentel), after which Torremolinos was actually named many years ago. Other landmarks of interest here include the San Miguel Hermitage and the striking Casa de los Navajas (House of Navajas), while the more modern Torremolinos Town Hall (Ayuntamiento) also deserves a mention. 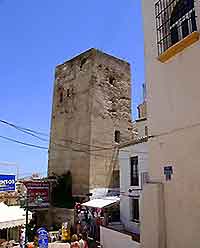 Known throughout the area, Pimentel Tower is one of the most famous landmarks in Torremolinos and stands alongside the main beachfront. Also known locally as the 'Torre Vigia', the tower is the town's namesake and was built in the 14th century as part of the area's defence strategy, being a notable lookout point. Today the tower has become a popular tourist attraction in its own right and the staircase can be climbed, offering superb panoramic views of the coastline from the top.
Open hours: daily
Admission: free

Address: Calle Las Mercedes, Torremolinos, Costa del Sol, Spain
Without doubt one of the most loved buildings in Torremolinos, the Casa de los Navajas dates back to 1925, when it was built by Antonio Navajas Ruiz. Standing in the High Bajondillo area, the house offers Mudejar-style architecture and was once owned by the wealthy Luque Navajas family. The Casa de los Navajas is now managed by the local council.
Open hours: daily
Admission: free

A historic white-washed building which is one of the area's most well-known man-made landmarks, the San Miguel Hermitage is most famous for hosting the celebrations of San Miguel, which are one of the most popular events on the Torremolinos calendar, attracting huge crowds.
Open hours: daily
Admission: free

Address: Plaza Blas Infante 1, Torremolinos, Costa del Sol, 29620, Spain
Tel: +34 95 237 9400
The Ayuntamiento de Torremolinos is the grand Town Hall and is home to a number of important departments and officers, responsible for the area's thriving tourism industry. With modern white architecture and small fountains outside, the Torremolinos Town Hall organises many of the area's most notable events.
Open hours: Monday to Friday - 09:30 to 13:30
Admission: free