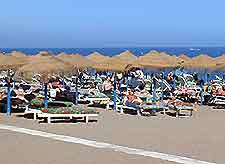 Torremolinos has become known for much more than just its beaches and offers a comprehensive calendar of events, which take place every year. The main festivals in Torremolinos include the February carnivals, Holy Week as Easter approaches, and the summer seafood festival of Pescaito (Fried Fish Day) each June.

Other popular festivals and events in Torremolinos include El Dia del Turismo (Tourist Day) in September, which celebrates the region's thriving tourism industry. Many additional festivities can be found close to Torremolinos, in the neighbouring resorts of Malaga and Marbella.