The city of Milan (Milano in Italian) is situated within Lombardy region, in the province of the same name. Milan resides in northern Italy, where it is the regional capital and borders the Province of Monza and Brianza.

A leading financial city, Milan enjoys much wealth and prosperity, with the majority of its most visited attractions being based within the area between the Castello Sforzesco and the cathedral. From the city's train stations, these attractions can be easily reached by using the underground train network, known locally as the Metropolitana Milanese (MM).

Lying on the northern side of the cathedral, the Brera district is rich in culture and home to more than its fair share of related attractions, such as art galleries. Brera is also known for its cluster of fashion boutiques and acclaimed shopping streets, while to the south is the Navigli area, where the nightlife is renowned. Tourists may also like to head to the northern side of the city, where the trendy Corso Como clubs reside, within the Porta Garibaldi area.

For tourist information and maps about Milan, consider the outlets located at the Linate and Malpensa airports, as well as at the Stazione Centrale (Central Train Station). 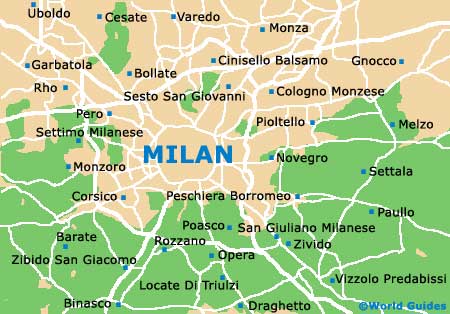