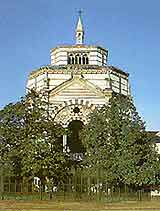 The museums of Milan are quite simply wonderful and likely to be a true highlight of any Italian vacation. Packed with heritage information about the city's past, Milan's museums also concentrate on a variety of different subject matters, such as science, technology, movie making, art and famous individuals.

Grown-ups looking for religious treasures in Milan should head to the Museo del Duomo (Duomo Museum), which is to be found on the ground floor of the magnificent Palazzo Reale, on the Piazza del Duomo. Other venues of note include the Civico Museo Archeologico, the Museo Poldi-Pezzoli, the Palazzo Bagatti-Valsecchi, the Palazzo Dugnani and the Casa del Manzoni.

Address: Via Santo Spirito 10 / Via Gesù 5, Milan, Italy
Tel: +39 02 7600 6132
This grand palace is situated in central Milan and is home to one of the finest museums in Europe. It was set up by the Bagatti Valsecchi heirs so that they could share their beautiful home and impressive collections with the general public. Highlights include collections of art works by some notable artists such as Giovanni Bellini, Giampietrino and Zenale, majolica, glassware, furniture and many special exhibitions. The museum is closed on some national holidays and guided tours are available.
Open hours: Tuesday to Sunday - 13:00 to 17:45
Admission: charge

Address: Corso Venezia 55, Milan, Italy
Tel: +39 02 781 312
Milan's national history museum was founded in 1838 with the donation of the Giuseppe de Cristoforis and Giorgio Jan collections. This large and important building was constructed in 1893 and now holds many interesting exhibits and collections, including reconstructions of dinosaurs, skeletons, insects, mammals, reptiles, scientific instruments and a specialist library with over 30,000 books. Highlights include a large fossil collection of the Besano Glacier dating back 200,000,000 years and also several detailed recreations of animal habitats.
Open hours: Monday to Friday - 09:00 to 18:00, Saturday and Sunday - 09:30 to 18:30
Admission: charge

Address: Via Manzoni 12, Milan, Italy
Situated in north-east Milan, the Museo Poldi-Pezzoli is a private museum that was established by Gian Giacomo Poldi Pezzoli and opened to the public in 1881. The building itself is a good example of a late 19th-century aristocratic residence in Milan and both the exterior and interior are well preserved. Inside the museum are many exhibits, including Pezzoli's fine collection of sculptures, paintings - many by notable artists, watches, jewellery, glass, textiles, ancient armour and much more.
Open hours: Tuesday to Sunday - 10:00 to 18:00
Admission: charge

Address: Via Sant'Andrea 6, Milan, Italy
Located in the 18th century Palazzo Morando Attendolo Bolognini, the City Museum of Contemporary History houses several museums with a large amount of interesting Milan memorabilia, historic documents and paintings of the city. There is also a conference room where debates, meetings and events on contemporary history are often hosted.
Open hours: Tuesday to Sunday - 10:00 to 17:00
Admission: charge

Address: Via Manin 2, Milan, Italy
Tel: +39 02 655 4977
Milan's Palazzo Dugnani was built over 300 years ago and has belonged to Milan city council since 1846. It is located in north-east Milan and contains many wonderful features, such as a magnificent staircase, gallery for musicians, frescoes painted by the great Giambattista Tiepolo and also the Museo del Cinema. The museum documents the evolution of motion-picture cameras dating back to the 18th century. It contains much historical apparatus, movie memorabilia and also some film posters from the early 1900s.
Open hours: Tuesday to Friday - 15:00 to 18:00
Admission: charge

Address: Via Santa Maria, Milan, Italy
Tel: 030 914 4529
The Civic Archaeological Museum is located in north-west Milan, in the cloister of Santa Maria de Senioribus. Exhibits include displays of Bronze Age artifacts and also the world's oldest wooden plough still in existence, dating back around 4,000 years.
Open hours: Tuesday and Friday to Sunday - 15:00 to 19:00
Admission: charge

Address: Palazzo Reale, Piazza del Duomo 14, Milan, Italy
The Duomo Museum, in the heart of Milan, was founded in 1953. It houses many interesting objects from the Duomo, such as paintings, sculptures, stained glass windows, restoration information and many religious objects of importance. One of the most interesting exhibits is an old wooden model of the Duomo, which was made in the early 1500s.
Open hours: daily - 10:00 to 18:00
Admission: charge

Address: Piazza della Scala, Milan, Italy
Tel: +39 02 805 3418
The Theatre Museum is part of the wonderful Teatro alla Scala opera house in central Milan. It was founded in 1913 and houses many interesting objects relating to the La Scala and also of general theatrical interest. Exhibits include sculptures, paintings, ceramics and of particular interest, many original scores of music.
Open hours: May to October - daily 09:00 to 12:00, 14:00 to 17:00; November to April - Monday to Saturday 09:00 to 12:00, 14:00 to 17:00
Admission: charge

Address: Via Morone, Milan, Italy
Tel: +39 02 8646 0403
In the heart of Milan is the Casa del Manzoni, the house where the famous Italian author Alessandro Manzoni lived from 1814 until his tragic death in 1873, after he fell down the steps of San Fedele. During his residence, Manzoni received many important visitors, including Garibaldi, Verdi and author Tommaso Grossi, amongst others. The wonderful interior is well-preserved and the house is now the seat of the National Centre for Manzoni Studies. There is a large library with over 40,000 books, including the complete works of Manzoni himself.
Open hours: Tuesday to Friday - 09:00 to 12:00, 14:00 to 16:00
Admission: charge

Address: Via San Vittore 21, Milan, Italy
Tel: +39 02 485 551
The Science and Technology Museum in south-west Milan boasts one of the world's leading science and technology collections. Housed in the 16th-century former Olivetan monastery of San Vittore since 1947, the museum has a huge number of exhibits in four different buildings. Highlights include the first mechanical counting machine - which was invented in 1642, state-of-the-art computers and displays about astronomy, acoustics, trains, air and sea travel, cinema photography, watch making and much more besides. The Leonardo da Vinci Gallery has many interesting wooden models of his numerous inventions, together with his detailed drawings and sketches. Many of the exhibits here are interactive.
Open hours: Tuesday to Friday - 09:30 to 16:50, Saturday - 09:30 to 18:20
Admission: charge